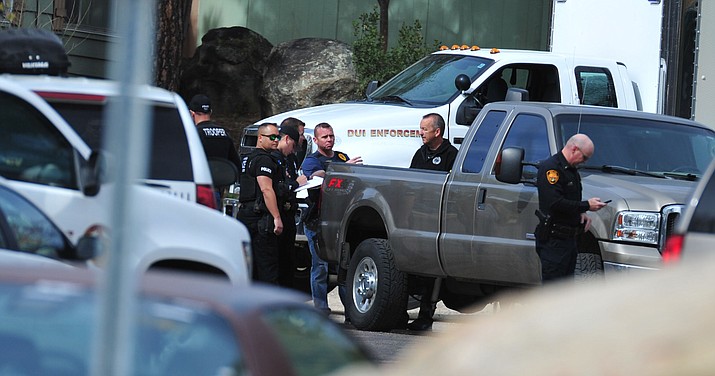 Multiple police agencies are on scene of an officer involved shooting in the 1000 block of Wagon Trail off of Gail Gardner Way in Prescott Friday, April 5. (Les Stukenberg/Courier)

Multiple police agencies are investigating an officer-involved shooting in the 1000 block of Wagon Trail off of Gail Gardner Way in Prescott.

At about 6:50 a.m. Friday, April 5, Prescott Police Department (PPD) officers responded to the area of the Wagon Wheel mobile home park based on a report of a women yelling for help and banging on doors in the neighborhood.

Multiple police agencies are on scene of an officer involved shooting at this home in the 1000 block of Wagon Trail off of Gail Gardner Way in Prescott Friday, April 5. (Les Stukenberg/Courier)

When officers found the woman, she was with two men who were suffering from apparent stab wounds, according to a PPD news release. The men said they had been assaulted by an unknown man who was still inside a nearby mobile home.

Officers were able to find the male suspect, who repeatedly threatened the officers by throwing knives in their direction, PPD reported. When the man wouldn’t comply with the officers’ instructions, two of the officers shot him.

The officers rendered immediate medical aid to the suspect, who continued to be combative, PPD reported. The suspect was flown to a Phoenix-area hospital for treatment. His identity was being withheld by police pending certain identification.

The three victims were transported to regional-area hospitals for treatment of what is believed to be serious but non-life threatening injuries that were allegedly inflicted by the suspect, PPD reported.

No police officers were injured during the incident.

The area of Gail Gardner Way and Wagon Trail was closed for an undetermined duration as the investigation continues, PPD said.

Assisting with the investigation are the Arizona Department of Public Safety and the Yavapai County Attorney’s Office.