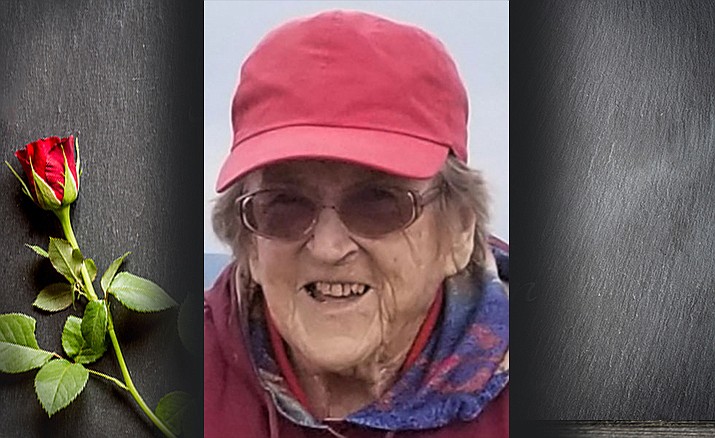 Jean M. Cross, artist, educator, historian and author, passed away in Prescott Valley, Arizona, at the age of 94 on Monday, April 1, 2019. She was looking forward to her next adventure!

As one of the area’s foremost historians on the history and culture of the Prescott area, Jean’s contributions have left lasting legacies for generations to come. Jean published a book in 2009 through Arcadia Press titled, “Prescott Valley, Images of America.” When Jean was in her eighties, she and her friend, Jerry Munderloh, created the Mining Exhibit and Trail for the Visually Impaired at Prescott Valley’s Fain Park. She received the Community Improvement Award in 2002 and the Heritage Award in 2008 from Prescott Valley’s Chamber of Commerce for her dedication to the area’s heritage preservation.

Jean wrote articles for the Prescott Courier and the Prescott Valley Tribune over several years concerning the historic events, people and landmarks of the area. She teamed with other community leaders to establish the “Old Town Historic District,” also in Prescott Valley and laid down ideas for many trails in the area, including the Glassford Hill Trail. On her 94th birthday she was able to stand at the top of Glassford Hill thanks to the kindness of Town Manager Larry Tarkowski. It was one of her happiest days! Jean was born to Lillian (nee Mahaney) and Lester Cross in upstate Cortland, New York, on Sept 19, 1924. She had an older sister and brother, Nancy and Richard (Dick). She graduated with honors from St. Mary’s High School in 1942 and then obtained a Bachelor’s Degree in Education, also with honors, from Cortland State University of New York (SUNY) in 1946. She belonged to Kappa Delta Pi honorary sorority for 73 years. Jean earned two Master’s degrees: a Master of Fine Arts from Catholic University in Washington, D.C., in 1959 and a Master of Arts in Education from Manhattan College, Riverdale, New York, in 1965. She retired from teaching in the State of New York in 1980. She moved to the Prescott area in 1980, proud of driving a U-Haul by herself across the United States. She had one of the first homes built in Yavapai Hills because of her great interest in all things “Tom Mix.”

Her retirement years were filled traveling the Southwest and with volunteering activities such as: Sharlot Hall Museum (25 years), Arizona Archaeological Society, Prescott Walking Tours, Art Docents, Yavapai Trails Association Board, Prescott National Forest Volunteers, Sacred Heart and St. Germaine Church Choirs, Prescott Valley Historical Society, and Dewey-Humboldt Historical Society. A firm believer in “use it or lose it!” Jean walked every day until a month ago. She was an accomplished wood carver, potter and artist. Her passion for Western and Native American history, culture and art was evidenced in all her surroundings.

Jean never married and had no children, but she is survived by many who loved her: Her nephew, William (Chris) Cross of Peoria and great-nephew Jeremy (Valerie) Cross of Phoenix and their children, Marshall, Avery, and Grace, as well as the Grovenstein Family, Glenn and Darcy and their children, Whitney, Emory, Ezekiel and Lacy and families. She was preceded in death by her parents, sister, brother, and nephew, Edward Cross.

A Celebration Of Life Mass will be held at St. Germaine’s Catholic Church on Tuesday, April 9, 2019, at 10:30 a.m., with a luncheon following. (She was one of the oldest members of the parish and on the original building committee.)

Funeral arrangements entrusted to Sunrise Funeral Home. Donations can be made to St. Germaine’s Building Fund or St. Jude’s Hospital.