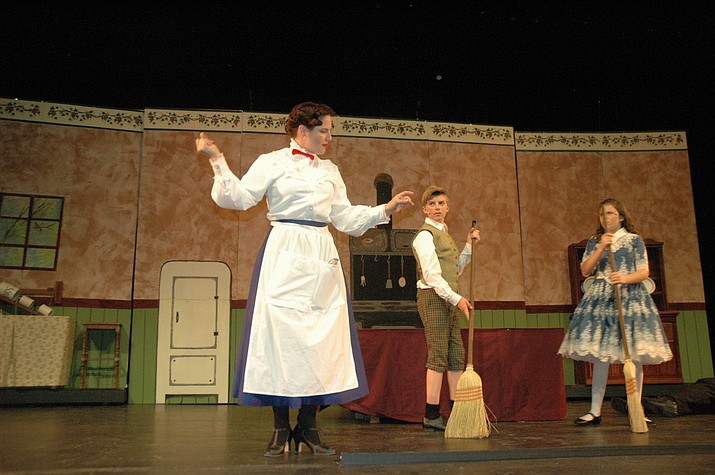 The first performance will be tonight at 7 p.m. (Courtesy)

There’s only one nanny who is not only British but practically perfect in every way – and her umbrella is bringing her to Prescott this weekend.

“It’s just one of those shows that hasn’t been told here,” she said. “I just felt like our community would love it.”

The musical premiered after the film was released in 1964 and it has the same musical numbers and dances with all the characters except for the penguins, Hofer said. It’s also combines the book and the movie, staying truer to the book, she said.

Hofer said her favorite part of the show is in the in the nursery when the children are misusing their toys. Poppins works to teach them a lesson and it goes along with a number called “Playing the Game,” she said.

“What happens in this number is that … they go to sleep and she snaps her finger and she brings about this nightmare for them where all the toys come to life and teach them a lesson on how to treat their toys,” Hofer said.

With all of the music, flying and nostalgia the show brings, the show is a timely one, Hofer said. It brings to mind how we as people treat each other and our families and how when things unravel, it’s the simple things that people need to do together that matter most, she said.

Tickets are available online at www.ycpac.com or by calling the box office at 928-776-2000. All shows are at Yavapai College Performing Arts Center, 1100 E. Sheldon St.

At a Glance: Lonely Street brings quirky musical
See ‘Beauty and the Beast’ at Yavapai College
Yavapai College Music Dept. puts on ‘The Music Man’
‘Into the Woods’ weaves fairytales into dramedy
Movies at the Elks: 'Mary Poppins,' Jan. 26