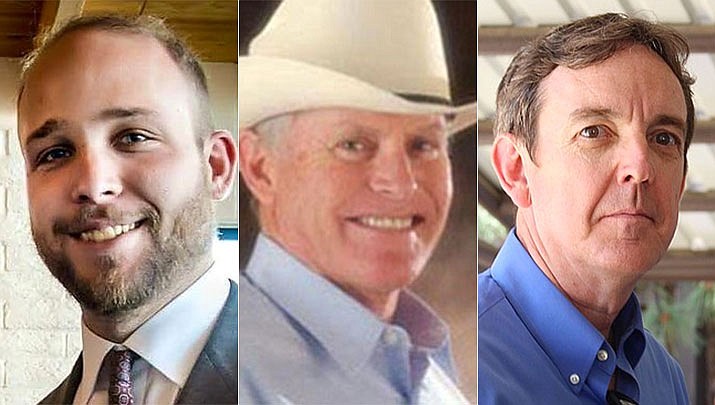 The Yavapai County Republican Precinct Committeemen from Legislative District 1 have selected three individuals to replace the embattled Rep. David Stringer, who resigned last week after a police report was obtained by the House Ethics Committee of a 1983 arrest in Maryland for allegedly paying two underage boys for sex.

Former Arizona Senate President Steve Pierce, GOP field organizer Steven Sensmeier and former Arizona Secretary of state Ken Bennett were selected out of a field of 11 candidates by a voting process that took place Sunday by the Republican committee.

All three names will be sent to the Yavapai County Board of Supervisors for consideration to replace Stringer in the LD1 seat for the Arizona House of Representatives.

The meeting is scheduled for 9 a.m. Wednesday, and will be held at the Yavapai County Board of Supervisors meeting room located at 1015 Fair St., Prescott, AZ 86305. It can also be viewed online by visiting yavapai.us/meetings/video-list.

Randy Garrison, chairman of the Board of Supervisors, told the Courier in a story last week that county officials were notified of the coming replacement process by Secretary of State Katie Hobbs, just hours after Stringer’s resignation.

The Board of Supervisors is prepared to make the final appointment Wednesday and swear in the new LD1 state representative, Garrison said.

“This is the middle of the (legislative) session, and we want to get somebody in office as soon as possible,” Garrison told the Courier March 28.

The special meeting at 9 a.m. Wednesday will precede the board’s regular April 3 meeting.