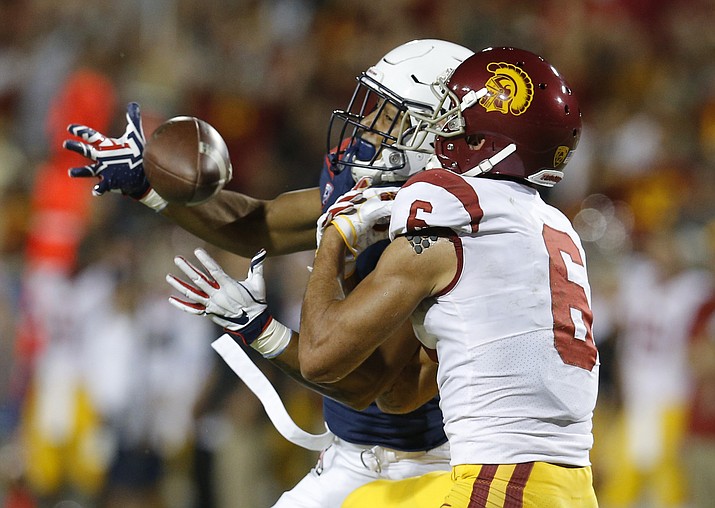 TUCSON — Aca'Cedric Ware ran for 197 yards and two touchdowns, and Southern California overcame a rash of penalties to hold off Arizona for a 24-20 victory Saturday night.

USC (3-2, 2-1 Pac-12) dominated the Wildcats while building a 24-point third-quarter lead, but lost two fourth-quarter fumbles to let Arizona (2-3, 1-1) back in it. The Trojans also had 18 penalties for 169 yards, including a pass interference call that negated an interception in the fourth quarter.

Arizona's Gary Brightwell scored on a 1-yard run with 1:40 to play, but Lucas Havrisik missed the extra point and USC recovered the onside kick.

JT Daniels managed the Trojans offense well in the first half before the Trojans went stagnant in the second. He completed 16 of 24 passes for 197 yards and lost a fumble to set up Khalil Tate's 32-yard touchdown pass to Cedric Peterson.

Tate threw for 232 yards and two touchdowns, but was limited to 38 yards rushing. J.J. Taylor, who had 284 yards rushing against Oregon State last week, was held to 50 yards on 18 carries.

The Trojans controlled Arizona on both sides of the ball while building a 17-0 halftime lead.

USC racked up 281 total yards in the first half, scoring on Vavae Malepeai's 1-yard run in the first quarter and Ware's 26-yarder in the second. The Trojans stymied the Wildcats' offense, limiting them to 116 yards while intercepting a pass by Tate to set up Michael Brown's 42-yard field goal.

Arizona caught a break when a facemask penalty — USC's ninth penalty of the half — tacked on to a 20-yard completion gave the Wildcats a chance for a field goal with no time on the clock. Marvell Tell blocked Havrisik's 28-yard field-goal attempt, preserving the first-half shutout.

The second half continued the same as the first: Arizona gained 13 yards before punting on its first drive, Ware ripped off a 69-yard touchdown run.

The Wildcats recovered a fumble at USC's 32-yard line after sacking Daniels early in the fourth quarter and Tate hit Cedric Peterson for a 32-yard touchdown on the next play, cutting the lead to 10.

USC had a good rhythm going in the first half offensively, but labored after Ware's second TD run. And those penalties. The Trojans have plenty to clean up in their week off.

Arizona took too long to get going, unable to fight all the way back from a 24-0 deficit.

USC has a bye week before hosting Colorado on Oct. 13.

Arizona plays at No. 24 California next Saturday.