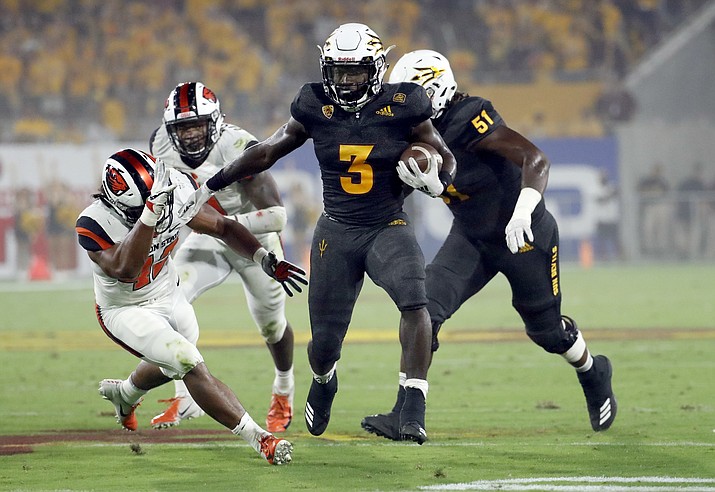 Benjamin, a sophomore from Wylie, Texas, scored on runs of 44, 47 and 10 yards and caught an 8-yard touchdown pass.

Freshman Jermar Jefferson gained 254 yards on 31 attempts and scored twice for Oregon State (1-4, 0-2), becoming the third Beaver in school history to top 200 yards in a game twice in a season. 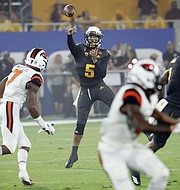 Benjamin broke the school's single-game record of 250 yards rushing set by Ben Malone against Oregon State in 1973. Saturday's performance was No. 8 on the Pac-12 list.

The Beavers' beleaguered defense gave up a second big game in a row on the ground. Arizona's J.J. Taylor rushed for 284 yards at Oregon State last week.

Benjamin scored Arizona State's first touchdown with a 44-yard run and, on the first play of the second quarter, caught the TD pass from Manny Wilkins.

When Benjamin broke a couple of would-be tackles and raced 47 yards for his, and Arizona State's, third touchdown of the night, the Sun Devils were up 24-3 and appeared headed for a rout.

But the Beavers have shown this season they can move the ball and scored a pair of touchdowns on Jefferson's runs of 11 and 27 yards to cut the Arizona State lead to 24-17 with 1:02 left in the half.

That was plenty of time for the Sun Devils, who needed just 48 seconds to go 75 yards in seven plays. Wilkins threw 19 yards to Kyle Williams for the score with 14 seconds left and Arizona State led 31-17 at the break.

After Arizona State stretched the lead to 38-17 with a pair of third-quarter touchdowns, Jefferson's 45-yard run set up a fourth-down, 2-yard pass from Conor Blount to Noah Togiai cut it to 38-24.

On their next possession, Wilkins was stopped on a fourth-and-1 play at the Oregon State 40. The Beavers drove downfield and had it fourth-and-goal at the 1. A false start penalty pushed the Beavers back and Blount's pass fell incomplete.

Benjamin did most of the work again as Arizona State rolled downfield for his 10-yard touchdown run that made it 45-24.

Blount played the entire game at quarterback as Jake Luton missed his second straight game with a high ankle sprain. The Beavers ran their road losing streak to 22 games.

Oregon State: The Beavers' run defense was as bad as advertised and it will be a problem all season long. But the Beavers have a big-play runner of their own in Jefferson. Hard to see much success for this team though under first-year coach Jonathan Smith.

Arizona State: The missed tackles of his defense will give Edwards plenty to talk about with his team in the coming week but it was some kind of night for Benjamin, regardless of who the team was playing.

Arizona State: is at Colorado next Saturday.