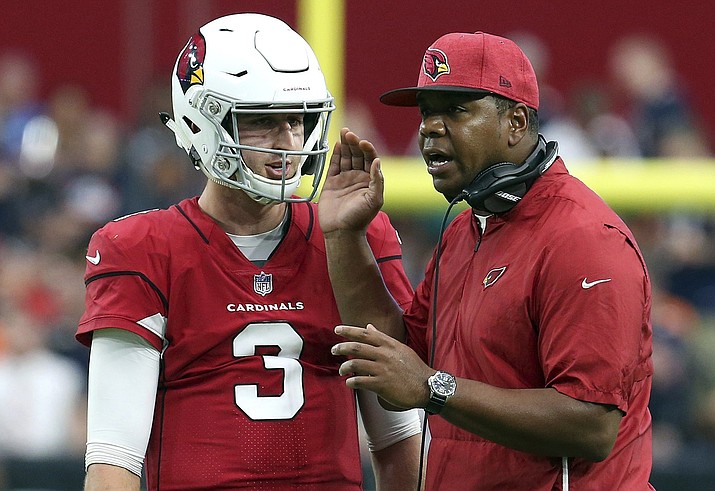 In this Sunday, Sept. 23, 2018, file photo, Arizona Cardinals quarterback Josh Rosen (3) talks with quarterbacks coach Byron Leftwich, right, during the second half of an NFL football game against the Chicago Bears in Glendale, Ariz. Four games into his NFL career, Rosen is a starting quarterback and his job is a tough one. He will lead the winless Cardinals into Sunday's game against Seattle. (Ralph Freso/AP, file)

TEMPE — One thing rookie Josh Rosen will certainly bring to his first start as an NFL quarterback is confidence. He has that in abundance.

"I think a lot of times, an attitude and confidence and persistence, I think that's good in times when things aren't going too great, like this," he said Wednesday. "At least fake it until you make it."

Off to an 0-3 start under new coach Steve Wilks, the Cardinals are in dire need of a shot of adrenaline going into Sunday's home game against Seattle, and Wilks believes Rosen can provide it.

"I think he has a lot of confidence, and you saw that when he went into the game this past week," Wilks said after the team's first practice with Rosen as the starter. "You see it each and every day when he's out there, particularly today. The guy does a tremendous job commanding the huddle. Guys respect him. You can tell they're feeding off his energy. So, I just want him to go in there, relax and have fun. It's still football."

Wilks benched starter Sam Bradford late in Sunday's 16-14 loss to Chicago and gave Rosen his first NFL experience. Rosen completed 4 of 7 passes for 36 yards in his brief time on the field and was intercepted. He had another interception run back for a touchdown but it was nullified by an offside penalty against the Bears.

Still, Wilks saw enough to give Rosen the start for the sputtering offense, which ranks last in the NFL in most statistical categories.

Now all four of the first four quarterbacks chosen in this year's draft are starting. Rosen was reminded of his well-traveled statement that he'd show those who picked quarterbacks ahead of him what a big mistake they had made. Rosen went at No. 10 overall.

"We'll see how it all turns out," Rosen said Wednesday, "but right now I'm just really excited to be playing this week. Hopefully, I can back up all of what I said."

Rookie wide receiver Christian Kirk has known Rosen since high school. He was asked what kind of guy Rosen is.

"He's different. He's one of a kind," Kirk said. "But he's competitive. He competes at everything he does. Even when he was taking reps on the scout team, he was out there making plays and just competing, just having fun with football."

The problems for the offense certainly go far beyond quarterback play. The offensive line has been weak and the running game virtually nonexistent.

Running back David Johnson, the NFL leader in yards from scrimmage two seasons ago, has 116 yards in 34 carries over three games, an average of 3.4 yards per carry. He's caught another 10 passes for 63 yards. Johnson has scored two of the offense's three touchdowns this season but has not had any of the dynamic big plays that were his trademark before he injured his wrist in last year's opener and missed the rest of the season.

Only two wide receivers — Kirk and Larry Fitzgerald — have caught a pass. They have 12 apiece.

Arizona is averaging 190 yards per game, last in the NFL.

So on comes the 21-year-old Rosen to try to turn things around and prevent what would be the Cardinals' first 0-4 start since 1986, two years before the franchise moved from St. Louis to Arizona.

"It's still football," Rosen said. "Regardless of how much everyone is getting paid around you, it's still football, just wearing different jerseys, and that was probably the most relieving thing about getting on the field (last week) was just completing a ball and sort of understanding it's still the same game I've been playing since third grade."

Rosen was asked when he decided he was going to be an NFL quarterback.

"I don't know if it was ever a decision," he said. "It was always just kind of a dream. Every step from high school to my first scholarship to a couple games in college when you realize it's a possibility. It's more of a dream that gets realized slowly over time that, 'I actually have a shot at this thing.'"