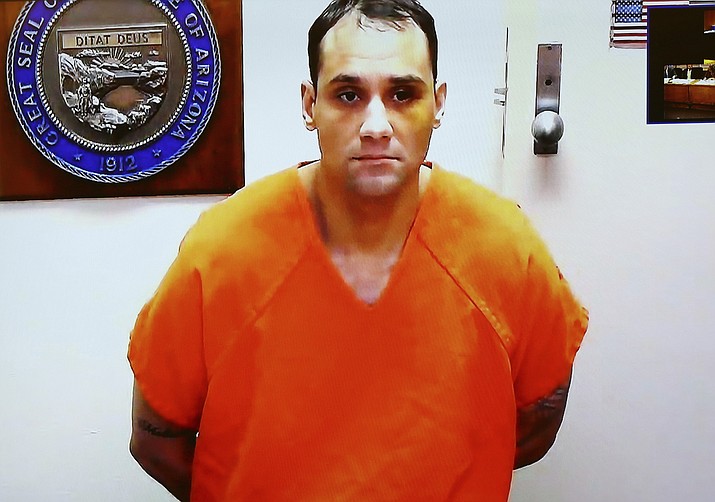 Christopher Matthew Clements is arraigned via video in Pima County Superior Court in Tucson, Ariz., Monday, Sept. 24, 2018. Clements, a convicted sex offender who was indicted this month in the slayings of two Arizona girls who disappeared and were later found dead years ago, faced arraignment Monday on charges of first-degree murder, kidnapping and sexual exploitation of a minor. (Rick Wiley/Arizona Daily Star via AP)

PHOENIX — For years, police couldn't figure out how a 6-year-old girl was taken from her bedroom window while she slept in her family's Arizona home, never to be seen again.

Then came a call from a woman engaged to a convicted sex offender who had bounced around various states, leaving a trail of criminal convictions before settling in Tucson.

The woman told the FBI that her fiance had information about the whereabouts of Isabel Celis, a hazel-eyed, energetic little girl whose disappearance the night before a scheduled softball game had shaken her community to its core.

That call came in February 2017, five years after Celis' dad reported her missing.

On Monday, 36-year-old Christopher Matthew Clements, convicted sex offender, pleaded not guilty to charges stemming from Celis' killing and the killing of another young girl whose body was found in the same area.

Clements was arraigned in a Tucson courtroom wearing an orange jumpsuit and sporting a black eye, which likely stems from a fight jail authorities said he had been involved in last week.

Clements lived some two miles from the Celis family home when the girl disappeared in April 2012. His conviction for failing to register as a sex offender had been overturned on a technicality.

From the time Celis disappeared and the time her remains were found a year ago, police say that Clements also killed 13-year-old Maribel Gonzalez, whose body was found in the same remote desert area in 2014.

Police and prosecutors have been tight-lipped about how the girls died, whether there could be more victims and whether Clements knew the girls before the alleged killings.

But a search warrant affidavit that was recently unsealed says that a woman engaged to Clements called the FBI in February 2017 to say he knew the location of Celis' body, according to KOLD-TV , which first obtained the documents and shared them with The Associated Press.

Sergio Celis, wearing a shirt with a picture of his missing 6-year-old daughter, Isabel, gets a hug from a volunteer April 25, 2012, near their home in Tucson, Ariz. (A.E. Araiza/Arizona Daily Star via AP, File)

At the time, Clements was in jail on burglary charges. He traded information with authorities about the body's location in exchange for the charges being dropped and his impounded car being returned, according to the search warrant affidavit. Police in Tucson did drop those charges, but there were others pending in the Phoenix area, so he was jailed there.

Clements led authorities to Celis' skeletal remains on March 3, 2017, commenting on the items he recognized as he walked with police through the remote area, past old tires and toward a cluster of trees where Celis' remains were.

It was after when investigators realized the area was also where Gonzalez had been found three years earlier. The girl was supposed to visit a friend but never arrived; her mother, who was recovering from a near-fatal hit-and-run that killed her boyfriend, didn't realize until later that Gonzalez was missing.

It's unclear how Clements came in contact with Gonzalez or how he knew where Celis' room was, although they both went missing from the same area of Tucson. According to the search warrant, he alluded in a letter to there being two more bodies in that area, but police haven't reported finding any.

In October 2017, months after Celis' body was found, Clements' fiance called police again and tipped them off to items of interest that were buried in the couple's former home.

Police who searched that home found a little girl's purple sweatshirt and schoolwork with the name "Mercedes" on it, which was Celis' middle name.

Court records show Clements has an extensive history dating back to when he was 15 years old and was convicted of molesting a 4-year-old girl. He was sentenced as an adult to two years and 10 months in prison, according to federal court records.

During a 20-month period ending in August 2008, Clements was convicted for failing to register as a sex offender in Bay County, Florida; Multnomah County, Oregon; and in Tucson, Arizona.

In the Arizona case, he was sentenced to three years and 10 months in prison. But the conviction was reversed by an appeals court that ruled that a 2006 federal law requiring sex offenders to register did not apply retroactively to Clements.

"What we see is that the offenders that are failing to register absolutely have a higher risk of recidivism," Ahearn said.

Clements also has a 2007 conviction for making a false report to law enforcement in Tucson and convictions in 2002 for identity theft and felony assault in King County, Washington.

In a pending case against Clements in the Phoenix metropolitan area, he is accused of participating in a ruse that led to the burglary of a home owned by a couple in their 80s. Clements has pleaded not guilty to burglary and fraud charges in that case.

Celis' disappearance sent shockwaves through the Tucson community. Residents questioned how a little girl could simply be taken from her own bedroom. Police searching for her found her window open and the screen removed.

The investigation included hundreds of tips from the public, a massive search with police-trained dogs and interviews with over 15 registered sex offenders, although it's unclear whether police ever spoke with Clements.

The public, including cable TV show hosts and local media, placed blame on Celis' father, Sergio. The state's Child Protective Services agency barred Sergio Celis from having contact with his two sons, citing a need to ensure their welfare. Police would only say Sergio Celis voluntarily agreed to stay away from his children.

Despite all that, Sergio Celis and his wife, Becky, maintained hope their daughter would be alive. On Monday, they were in the Tucson courtroom when Clements made his appearance.