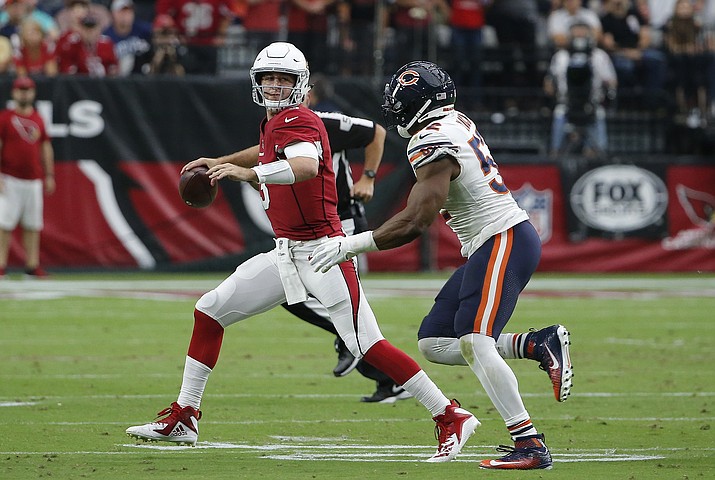 Arizona Cardinals quarterback Josh Rosen, left, looks to throw the ball as he is pressured by Chicago Bears linebacker Khalil Mack, right, during the second half of an NFL football game, Sunday, Sept. 23, 2018, in Glendale. (Rick Scuteri/AP)

TEMPE — Rookie Josh Rosen will take over as the Arizona Cardinals' starting quarterback this Sunday against the Seattle Seahawks.

Rosen, the 10th overall pick in this year's draft, replaced veteran Sam Bradford in Sunday's 16-14 loss to the Chicago Bears with 4:31 left to play after three Arizona second-half possessions ended in turnovers.

Rosen couldn't rally the Cardinals to a win, as he threw an interception to end his first drive and was sacked to end the second. But the rookie from UCLA completed four of seven passes for 36 yards and apparently showed coach Steve Wilks enough for him to make a change for the winless Cardinals (0-3).

"Josh plays with a lot of confidence. He gives us the opportunity to be successful," Wilks said Monday. "When you look at the situation when he went into the game, I didn't have a problem putting him in at that time because I know he's very confident in what he's doing."

Wilks met with the team Monday morning and informed the players of his decision. He didn't say whether Bradford would be the clear No. 2 quarterback or if that job would go to third quarterback Mike Glennon.

"The guys are disappointed, they're down, but they understand right now it's still early," Wilks said. "We need to find a way to finish football games, as we did not do (Sunday)."

Wilks said he made the decision Sunday to replace Bradford early in the fourth quarter after Bradford was sacked and fumbled away the ball with 11:33 left on the clock. The Bears then ran off almost seven minutes and took the lead on a field goal.

Bradford handled the news well, Wilks said, and will be asked to continue to help mentor Rosen.

"His demeanor is what you want at that position, I don't think it's too big for him," Wilks said of Rosen, "and I'm excited once again to get him out there and get him into a rhythm."

Arizona's offense has produced just 20 points in three games. Wilks felt going with Rosen would provide a spark against the Bears, and he hopes that will continue going forward.

"His mobility, being able to buy time in the pocket. I think he's accurate, he has a strong arm, he can put the ball where it needs to be," Wilks said. "Inexperienced? Yes. He's a rookie. So we're going to do a great job with the communication, making sure that the offensive line and he are on one accord from the standpoint of protections."