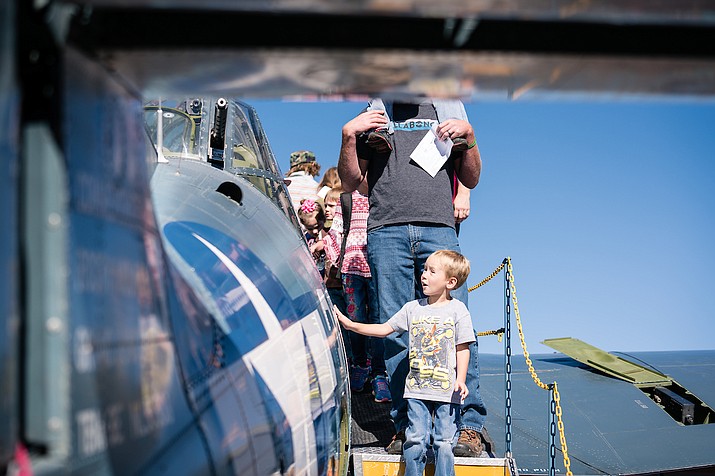 Young and old were allowed to get up close and personal with small aircrafts during Embry-Riddle Aeronautical University’s 2017 airshow. (Courtesy)

The skies will be active Saturday, Oct. 6, as Embry-Riddle Aeronautical University (ERAU) and the City of Prescott co-host Wings Out West.

The annual event will feature an aerial demonstration, numerous static aircraft displays, an aeronautical tech fair and a regional fly-in at Prescott Regional Airport, Ernest A. Love Field. Food vendors and concessions also will be on site.

This year’s airshow also will include a tribute to Ernest A. Love, one of Prescott’s original hometown heroes, who was shot down over France during World War I and later died. There will be an aerial reenactment of the fateful dogfight that eventually took Love’s life 100 years ago. There also will be comments from Prescott Mayor Greg Mengarelli, and an Ernest A. Love display hosted by the City of Prescott. For more information about other activities honoring Love, watch the Courier, dCourier.com or visit prescott-az.gov.

“Embry-Riddle is excited to once again partner with the City of Prescott to offer the Wings Out West Airshow to our friends, family, students, alumni, and our community,” ERAU Chancellor Dr. Frank Ayers said. “As we celebrate the 40th anniversary of our campus and the 90th anniversary of Ernest A. Love Field, it seems only right to join together for the celebration.”

Gates at Prescott’s Ernest A. Love Field will open to the public at 9 a.m., with the aerial demonstration taking place from 10 a.m. to noon. Admission and parking will be free. Attendees should use the main airport entrance off of Highway 89. There will be ample signage and personnel directing traffic to designated airport parking areas. For additional information about parking, including maps and more detailed airport information, go to www.PRCAirport.com.

“We are pleased to continue the Wings Out West partnership with Embry-Riddle for the second year in a row,” Mengarelli said. “Last year, Dr. Ayers and the university leadership agreed to open up their annual alumni event to the public, and invited the City to co-host. That airshow was a huge success, and we expect the event to grow even larger this year.”

Mengarelli added that 2018 has been a big year for the airport. United Express, operated by SkyWest Airlines, now flies non-stop seven days a week to Denver, and six days a week to Los Angeles.

“These are 50-seat, full-service jets that can get you from Prescott to Los Angeles in under an hour,” he said. “Plus with a number of connections available in Denver and LAX, you can get to hundreds of destinations worldwide with just one stop from Prescott airport. This is a game changer for travel in our region.”

This same United Express CRJ200 aircraft is scheduled to be on display during the Wings Out West airshow.

For additional information on Wings Out West performers, visit: http://prescott.erau.edu/octoberwest/wings-out-west-airshow/index.html.

Information provided by Embry-Riddle Aeronautical University. Watch dCourier.com and the Courier for more about the Wings Out West show.