Even if measure passes, state utility companies can ignore Prop 127 by paying fine 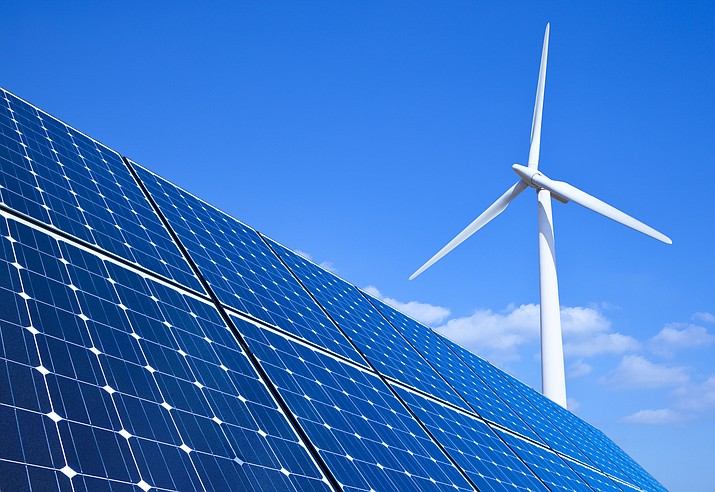 PHOENIX — It ultimately may not matter if Arizonans vote in November to require utilities generate more of their electricity from renewable sources.

Gov. Doug Ducey acknowledged Friday he signed legislation with the specific intent of allowing the affected companies to ignore the mandate proposed in Proposition 127 by paying a minimal fine. And he said the goal of protecting ratepayers outweighs any voter-approved constitutional provision.

“What I want to do is make sure we’ve got affordable, accessible energy,’’ Ducey told Capitol Media Services. “I don’t think when we have these mandates at the ballot box it gives the flexibility to our entrepreneurs and innovators to bring those solutions to the marketplace.’’

That mirrors the claims of Arizonans for Affordable Energy, the committee financed by Arizona Public Service, which is leading the fight against Proposition 127.

That still leaves the question of whether voters have a right to put a requirement that utilities get 50 percent of energy from renewable sources by 2030 into the Arizona Constitution.

The measure Ducey signed would not - and could not - legally override a constitutional mandate. In fact, only another public vote could alter or repeal it.

But the law, which took effect in August, spells out that any violation of a constitutional provision on renewable energy would be only a civil violation. More to the point, it makes the penalty a one-time fine that could be as much as $5,000 -- and as little as $100 -- effectively allowing utilities to ignore any voter-approved mandate by paying the penalty.

The governor defended that decision.

“I do not want to see hardworking taxpayer and families in our state have their energy rates hiked for a reason that will not improve the environment in our state,’’ he said.

APS spokeswoman Jenna Rowell said Friday that no decision has been made whether her company would choose to pay the fine rather than comply with what voters approve.

But APS lobbyist Rodney Ross, in testifying for the measure his company helped craft, acknowledged the utility wants the option of ignoring the results of the election if Proposition 127 were to pass.

“If that scenario were to take place, we would engage in a collaborative process with our regulators, with state lawmakers, with affected stakeholders, and together come to a decision regarding what the best course of action is to protect the state, the economy and its ratepayers,’’ Ross said.

Joe Barrios, spokesman for Tucson Electric Power and UniSource, both of which also oppose the initiative, said the companies “will try to’’ comply.

“It remains to be seen whether we would be able to do that,’’ Barrios said, saying the measure presents “some very real operational challenges.’’

The admission by both Ducey and the APS lobbyist about creating an escape clause for utilities to ignore Proposition 127 comes as both side of the debate are spending millions of dollars in a campaign that could leave voters with a better understanding of a line popularized by Mark Twain: There are lies, damn lies and statistics.

For the moment, it is the Arizona Corporation Commission that decides how much renewable energy each regulated utility must generate. The standard, last altered in 2006, requires 15 percent by 2025.

Prop 127 would constitutionally set that at 50 percent by 2030. And it would spell out that neither nuclear nor already-generated hydroelectric power could count towards that goal.

As of mid-August, the anti-127 campaign already had spent $10.4 million, much of that in the effort to knock the initiative off the ballot. All of that cash came from Pinnacle West Capital Corp., the parent company of APS.

Proponents, operating under the banner of Clean Energy for a Healthy Arizona, listed $8.8 million as of the same time. All of its cash comes from NextGen Climate Action, a political action committee run by California billionaire Tom Steyer.

The next reports, which will cover the extensive and expensive media campaign now being waged by both sides, are not due until next month. Both sides have produced their own reports about what voter approval would mean to consumers.

Proponents are relying heavily on a study by the Natural Resources Defense Council which concluded that average electric bills would be $3 a month less if the state enacts the 50 percent renewable mandate by 2030 - and $5 a month less by 2040.

That’s based in part on the assumption that, absent Prop 127, utilities will meet future demands by building new gas-fired generators which will require they purchase a steady supply of fuel. And history has shown that the price can fluctuate wildly.

By contrast, the NRDC says the cost of solar is dropping.

It does acknowledge that solar, by definition, is available only in daylight hours. But the study includes a presumption there will be not only battery storage but also some “flexible use of (existing) gas turbines and power plants.’’

The campaign against Prop 127 relies heavily on a study produced for APS by the Seidman Research Institute at Arizona State University which campaign spokesman Matthew Benson said is based on an analysis of the bills of the utility’s current customers.

It claims the average price of electricity will go from 13.6 cents a kilowatt hour to more than 29 cents. More to the point, the study says that the average residential bill will go from $1,658 a year to $3,594.

Benson acknowledged that is based in part on the presumption that approval of the measure will result in shuttering the Palo Verde Nuclear Generating Station. That is based on projections that there would be so much solar energy that the power would not be needed at peak solar hours but have nowhere to go and that the plant cannot be kept online and operating.

TEP also says Prop 127 would raise rates, but nowhere near the APS projections. Instead, the company figures residential customers would pay at least an extra $500 a year, with a $3,400 increase for the average business.

In a nearly identical statement in opposition, UniSource, TEP’s cousin company, figures a $650 increase for residential customer and $3,400 for business.

Also inherent in the debate is the claim by proponents that shutting down fossil-fueled plants will improve public health. They cite reports by the American Lung Association which rates Tucson a D for air pollution with Phoenix, Yuma and Flagstaff all getting an F.

But a study by NERA Economic Consulting commissioned by APS says the initiative “cannot be expected to improve reported levels of ozone pollution in areas where most Arizonans live.’’ That’s because much more of the chemical which can irritate lungs and eyes is produced from everything from wildfires to vehicle emissions.

Opponents also contend that if the concern is air pollution, Prop 127 would have allowed nuclear power to be counted toward the goal, as there are no smokestack emissions.

But campaign consultant Bill Scheel said there are health effects from nuclear power, saying there is a link between high rates of cancer in communities in and around Northern Arizona where uranium is mined.