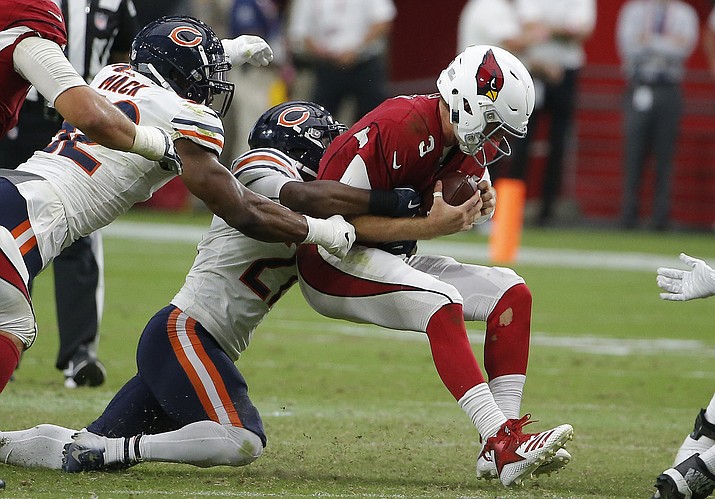 GLENDALE — Josh Rosen trotted onto the field in the fourth quarter to a rousing ovation. Arizona Cardinals fans, tired of watching their team's offense sputter for most of three games, were thrilled to see the rookie quarterback finally get his shot.

The hopes of a winning drive rose with a couple of quick completed passes. Seconds later, those aspirations were dashed with the same kind of mistake that put the Cardinals behind in the first place.

Thrust into a difficult position, Rosen failed to lead Arizona's beleaguered offense to a comeback, throwing an interception on his fifth NFL pass in the Cardinals' 16-14 loss to the Chicago Bears on Sunday.

"I guess you could say I'm kind of content that I got to get out there and sort of understand and get the feel of a real NFL game, but I definitely could play a lot better," Rosen said. "I'm looking forward to getting better in the weeks to come."

Rosen's chances to get better — at least in a live game — could come quickly.

Sam Bradford was expected to give Arizona a smooth transition in place of the retired Carson Palmer and serve as a mentor to Rosen, the Cardinals' quarterback of the future. Signed to a two-year, $20 million contract in the offseason, Bradford has turned in three uninspiring performances with the Cardinals (0-3), racking up turnovers while Arizona's offense has bogged down.

First-year Cardinals coach Steve Wilks stuck by his starter following the first two games, but brought in Rosen after Bradford opened the second half with two interceptions and a fumble. Rosen threw one interception and had a pick-6 negated by a Chicago offside penalty, but may have shown his coach enough in limited time to earn the start against Seattle next week.

"We're going to evaluate Josh as well as Sam," Wilks said. "We're going to watch the tape and see exactly what I want to do as far as moving forward with that."

Bradford was good early against the Bears, throwing two touchdown passes as Arizona (0-3) jumped to a 14-0 lead with its first opening-half points of the season. Then the offense bogged down, followed by the turnovers.

Bradford was 4 for 5 for 92 yards in the first quarter, completing two passes of at least 30 yards — Arizona's two longest of the season. The Cardinals bumbled around on offense after that, managing 30 combined yards on 22 plays in the second and third quarters.

Bradford threw interceptions on the Cardinals' first two drives of the second half as the Bears clawed back. A third turnover, a fumble, came early in the fourth quarter after Arizona reached Chicago's 23 with a chance to extend a one-point lead.

Bradford's final turnover led to Cody Parkey's third field goal, from 43 yards, that put the Bears up 16-14 and the Cardinals in need of an offensive spark.

"Obviously disappointed in the turnovers," said Bradford, who finished with 157 yards on 13 of 19 passes. "I felt like I put our team in a bad spot the second half today."

Rosen, the 10th overall pick of this year's draft, completed his first three passes to move Arizona near midfield, but underthrew Christian Kirk along the sideline and was intercepted by Bryce Callahan.

Arizona's defense held, giving the ball back to Rosen and the offense with 43 seconds, rekindling hope of a miracle comeback. It fell flat instead.

Rosen dodged one big mistake when the interception return for a touchdown was called back on a penalty, but the Cardinals' last-ditch effort ended when he was sacked before he could attempt a pass.

"I thought he looked pretty good, inconsistent in the end," Wilks said.

The Cardinals could use some consistency at this point.