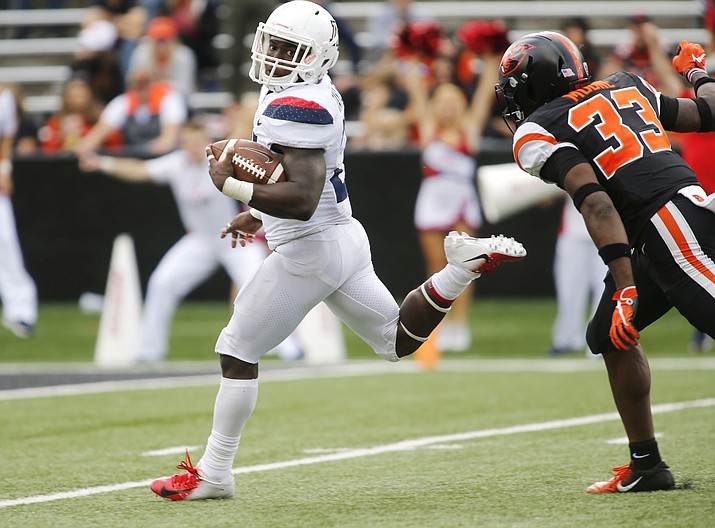 Arizona running back J.J. Taylor looks back at Oregon State's Jalen Moore as he heads to the end zone on a 62 run in the fourth quarter of an NCAA college football game in Corvallis, Ore., Saturday, Sept 22, 2018. Arizona won 35-14. (Timothy J. Gonzalez/AP)

CORVALLIS, Ore. — After an explosive game, Arizona running back J.J. Taylor was asked what was working well for him.

"The offensive line," he responded, then chuckled. "All the stuff that we do at practice just showed up today."

Taylor rushed for a Reser Stadium-record 284 yards and two touchdowns, including a 62-yard sprint, as Arizona ran wild over Oregon State 35-14 in the Pac-12 opener on Saturday afternoon.

Dual-threat quarterback Khalil Tate, hampered by an injured ankle this season, passed for 152 yards and two touchdowns for the Wildcats. Gary Brightwell added 113 yards rushing and a touchdown and Shawn Poindexter had 92 receiving yards and a score for Arizona. 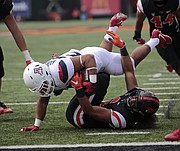 Arizona's Anthony Mariscal, top, tries to get to the end zone over Oregon State'sMatthew Tago, bottom, in the fourth quarter an NCAA college football game in Corvallis, Ore., Saturday, Sept 22, 2018. Mariscal fumbled on the play with Oregon State recovering on the one yard line. Arizona won 35-14. (Timothy J. Gonzalez/AP)

Arizona coach Kevin Sumlin said there was no doubt this was his team's best game of the season.

Safety Jalen Moore had 14 tackles, 13 unassisted, while Conor Blount threw for 137 yards and two touchdowns for the Beavers.

The Wildcats led 14-7 at halftime but missed scoring opportunities, in part due to penalties.

Arizona (2-2, 1-0 Pac-12) scored on the first possession of the second half to take control of the game, with Tate throwing a 16-yard touchdown to Poindexter.

Oregon State has juggled starters and playing time at quarterback, but Blount started his third straight game. Season starter Jake Luton replaced Blount last week versus Nevada but injured his ankle and did not play Saturday.

Last season, Arizona went for a whopping 534 rushing yards against the Beavers in a 49-28 victory. On Saturday, the Wildcats had 442 rushing yards.

"It's a stepping stone for our new offensive line to have a good rushing game," said left tackle Layth Friekh.

Arizona: The Wildcat offensive line opened up big holes for their running backs, who often weren't touched until they were well into the secondary. . No one expected Tate to match his career-high 349 yards and five touchdowns from last week against Southern Utah, but he was effective enough against the Beavers despite completing 9 of 17 passes.

YELLOW FLAGS — The Wildcats were hit with seven penalties for 55 yards. Arizona had a touchdown wiped out with about 4 minutes left in the first half due to an illegal man downfield penalty. After an intentional grounding call pushed the ball back further, kicker Lucas Havrisik badly missed a 55-yard field goal. Sumlin estimated that penalties cost the Wildcats 21 points on Saturday, and said flags could cause the team to lose a game down the road.

KICKING WOES? — Havrisik also missed a 43-yard field goal in the first half. Early in the third quarter, Arizona lined up for another 43-yard field goal, but the Wildcats rushed for a first down on a trick play. Havrisik is now 4 for 8, though that statistic is slightly misleading. All his misses are from 43 yards or longer.