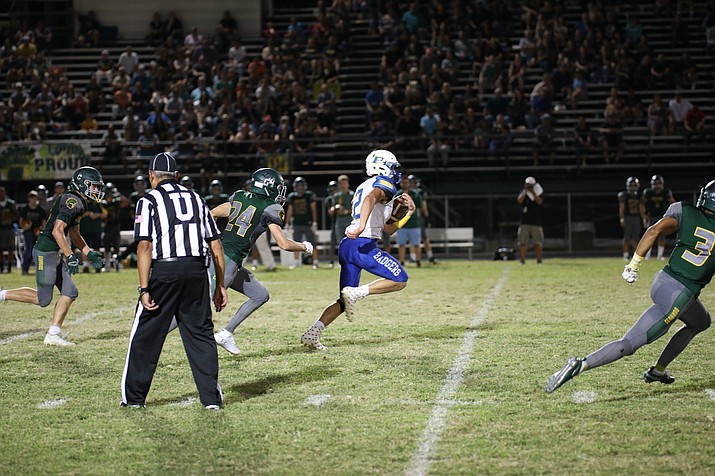 Prescott’s Austin Clark (12) runs for a touchdown in the first half against Canyon Del Oro on Friday, Sept. 21, 2018, in Oro Valley. (Jim Clark/Courtesy)

ORO VALLEY — Diego Munguia ran for 174 yards and three touchdowns, quarterback Zach Eidenschink threw for a score and Canyon Del Oro won its fourth-straight game with a 35-23 win over the Badgers on Friday night.

It is the fourth straight win for the Dorados, which lost 38-37 to Flowing Wells in Week 1 but have since outscored their opponents 169-56.

“We have some things to evaluate, but at this point in the year, everyone does,” Prescott head coach Cody Collett said during a radio interview by KYCA 1490 after the contest. “We have to find out how to come out with a little more fire earlier in the ballgame.”

The Badgers (3-2, 1-0 Grand Canyon) were originally scheduled to play Canyon Del Oro in Week 2 (Aug. 24), but the game was postponed due to lightning and moved to Friday night. Week 6 was originally a bye week for both clubs.

Prescott quarterback Austin Clark ran for 151 yards and two touchdowns, including a 51-yard run with 3:35 left in the second quarter to cut Canyon Del Oro’s lead to one, 14-13.

Canyon Del Oro’s Cory Bonstrom, who had a 77-yard touchdown catch from Eidenschink in the first quarter, intercepted a Clark pass with 5:01 to play in the game and Munguia put it away with his third touchdown run of the night on the ensuing possession.

Bryce Peters continued to add to his school-record point total for a kicker, hitting three field goals Friday night in Oro Valley, just outside of Tucson. Clark scored on a 3-yard run to make it 35-23 with 3:03 left, but it was too little, too late for the Badgers.

This season’s inaugural power point rankings are scheduled to be released by the Arizona Interscholastic Association on Tuesday, Sept. 25.

The Badgers will attempt to regroup this coming week in effort to get ready for Coconino on Friday, Sept. 28. Prescott hosts the Panthers during its homecoming week.

Coconino (4-1, 1-1 Grand Canyon) lost 28-14 to undefeated Bradshaw Mountain on Friday night in Flagstaff, and the Bears are now 6-0 and are one win away from tying the 1986 team for the best start in school history.

Kickoff next week is set for 7 p.m.