Pac-12 Preview: Game of the Week? Look no further than Stanford at Oregon
College Football 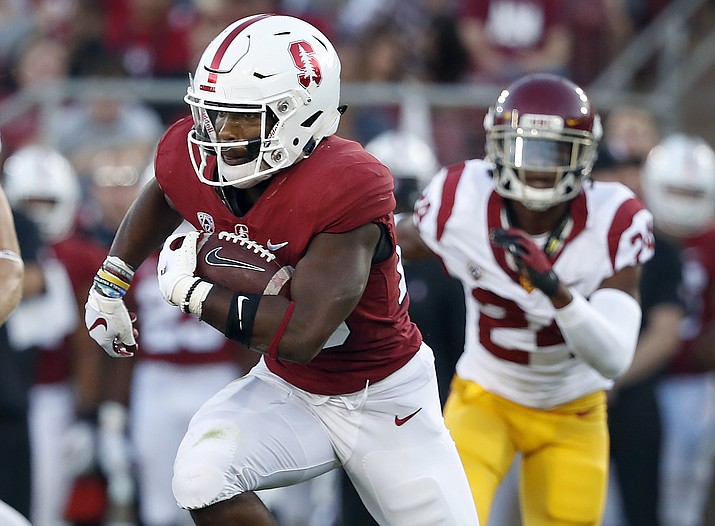 In this Saturday, Sept. 8, 2018, file photo, Stanford running back Bryce Love (20) rushes against Southern California during the first half of an NCAA college football game in Stanford, Calif. A couple of Pac-12 stars have a chance to put themselves into the Heisman mix on Saturday night when No. 7 Stanford visits No. 20 Oregon. Love, last year’s Heisman runner-up behind Sooners quarterback Baker Mayfield, is already way behind the field in the Heisman race, but the speedster can make up ground in a nationally televised night game. (Tony Avelar/AP, file)

Here are some things to watch in Week 4 of the Pac-12 Conference football season:

GAME OF THE WEEK

No. 7 Stanford is at No. 20 Oregon in a nationally televised game that will most likely have implications in the race for the division title and the conference championship. It is one of just two games this Saturday involving a pair of ranked teams, joining No. 22 Texas A&M at No. 1 Alabama. The game also features two of the league’s marquee names, Cardinal running back Bryce Love and Ducks quarterback Justin Herbert. Stanford is just a slim favorite. So yeah, this is the one to watch.

MATCHUP OF THE WEEK

Keep an eye on how Washington State quarterback Gardner Minshew does against USC at the Coliseum on Friday night. Minshew, a graduate transfer, leads the league and the nation with more than 400 passing yards per game. But the Cougs have faced relatively undemanding opponents, including San Jose State and FCS-level Eastern Washington. The Trojans, while off to a disappointing 1-2 start, could get back on track here.

The Pac-12 has four teams on a bye this weekend: California, Utah, Colorado and UCLA. ... There are five Pac-12 teams that are undefeated; the only conference with more is the SEC with six. The Pac-12 North leads the way with four undefeated teams. ... With one more game of 100-plus yards rushing, Washington’s Myles Gaskin will break the school’s record. Teammate Browning needs 68 yards of total offense to pass Cody Pickett as Washington’s all-time leader. ... The Trojans have a 17-game overall winning streak at the Coliseum and a 12-game winning streak at home over Pac-12 foes. ... Arizona State quarterback Manny Wilkins has back-to-back 300-yard passing games. ... Colorado has gone 16-3 in nonconference games over coach Mike MacIntyre’s tenure. ... Utah is leading the nation in total defense, allowing an average of just 204.7 yards per game, as well as pass defense (93 yards a game). ... The Pac-12 North is 15-3 in nonconference play.

Arizona is a six-point favorite Saturday when the Wildcats visit Oregon State, but the Beavers seem poised for a breakout. They came oh-so-close to defeating Nevada on the road last weekend, but Jordan Choukair missed a 33-yard field goal with four seconds left. One key to Oregon State’s chances will be the performance of Arizona QB Khalil Tate, who was limited after tweaking his ankle in the opener but relied on his arm for five touchdowns and a career-high 349 passing yards in last week’s 62-31 rout of Southern Utah. Last year, Tate ran for 206 yards and two touchdowns in a 49-28 victory over the Beavers, while passing for only 68 yards.

Speaking of the Beavers, keep an eye on freshman running back Jermar Jefferson, who rushed for 106 yards and two TDs against Nevada. He’s averaging 130.0 rushing yards to lead all freshmen at the FBS level. He ranks seventh nationally.

He has six total touchdown runs this season.