(NEW) FAHRENHEIT 11/9 - Filmmaker Michael Moore predicted that Donald Trump would become the 45th president of the United States. Traveling across the 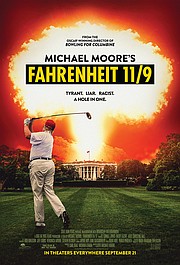 country, Moore interviews American citizens to get a sense of the social, economic and political impact of Trump's victory. Moore also takes an in-depth look at the media, the Electoral College, the government agenda and his hometown of Flint, Michigan. R – documentary

(NEW) ASSASSINATION NATION – High school senior Lily and her three best friends live in a haze of texts, posts, selfies and chats -- just like the rest of the 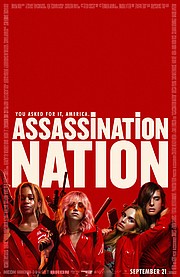 (NEW) THE HOUSE WITH A CLOCK IN ITS WALLS - In 1955, ten-year-old Lewis Barnavelt goes to New Zebedee, Michigan to live with his uncle Jonathan in a creaky old house which has a mysterious ticking heart. Recently orphaned, Lewis only wants to have a normal childhood but soon discovers he's in line for anything but that. Uncle Jonathan is in fact a mediocre but 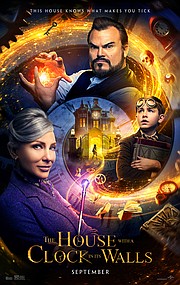 BISBEE ’17 - Radically combining collaborative documentary, western and musical elements, the film follows several members of the close knit community as they attempt to reckon with their town's darkest hour. In 1917, nearly two-thousand immigrant miners, on strike for better wages and safer working conditions, were violently rounded up by their armed neighbors, herded onto cattle cars, shipped to the middle of the New Mexican desert and left there to die. This long-buried and largely forgotten event came to be known as the Bisbee Deportation. Mike Anderson, Charles Bethea, Benjamin Joel Caron, Chris Dietz. PG, documentary

THE WIFE - Joan and Joe remain complements after nearly 40 years of marriage. Where Joe is casual, Joan is elegant. Where Joe is vain, Joan is self-effacing. And where Joe enjoys his very public role as the great American novelist, Joan pours her considerable intellect, grace, charm and diplomacy into the private role of a great man's wife. As Joe is about to be awarded the Nobel Prize for his acclaimed and prolific body of work, Joan starts to think about the shared compromises, secrets and betrayals. Glenn Close, Jonathan Pryce, Christian Slater, Max Irons, Harry Lloyd, Elizabeth McGovern, Annie Starke. R, drama

THE PREDATOR - From the outer reaches of space to the small-town streets of suburbia, the hunt comes home. The universe's most lethal hunters are stronger, smarter and deadlier than ever before, having genetically upgraded themselves with DNA from other species. When a boy accidentally triggers their return to Earth, only a ragtag crew of ex-soldiers and an evolutionary biologist can prevent the end of the human race. Stars Boyd Holbrook, Trevante Rhodes, Jacob Tremblay, Keegan-Michael Key, Olivia Munn, Thomas Jane, Alfie Allen, Sterling K. Brown. R – thriller, science-fiction

GOD BLESS THE BROKEN ROAD – Amber's ideal life is shattered when she loses her husband to the war in Afghanistan. Two years later, she finds herself in a struggle to save her home while providing for her 9-year-old daughter, Bree. When up-and-coming race car driver Cody Jackson rolls into town, Amber and Bree become wrapped up in his pedal to the metal way of life. With her faith hanging in the balance, Amber is forced to decide between the broken road she knows so well or trusting in a new path that God has provided. Stars Lindsay Pulsipher, Kim Delaney, Makenzie Moss, Robin Givens, Andrew Walker, Gary Grubbs. PG-13, drama

THE NUN – When a young nun at a cloistered abbey in Romania takes her own life, a priest with a haunted past and a novitiate on the threshold of her final vows are sent by the Vatican to investigate. Together, they uncover the order's unholy secret. Risking not only their lives but their faith and their very souls, they confront a malevolent force in the form of a demonic nun. Stars Demián Bichir, Taissa Farmiga, Jonas Bloquet. R – mystery, thriller

PEPPERMINT – Riley North awakens from a coma after surviving a brutal attack that killed her husband and daughter. When the system shields the murderers from justice, Riley sets out to transform herself from citizen to urban guerrilla. Channeling frustration into motivation, the young widow spends years in hiding -- honing her mind, body and spirit to become an unstoppable force. Eluding the underworld, the police and the FBI, Riley embarks on a deadly quest to deliver her own personal brand of punishment. Stars Jennifer Garner, John Ortiz, John Gallagher Jr., Juan Pablo Raba, Tyson Ritter. R – drama, thriller

SEARCHING – After David Kim (John Cho)’s 16-year-old daughter goes missing, a local investigation is opened and a detective is assigned to the case. But 37 hours later and without a single lead, David decides to search the one place no one has looked yet, where all secrets are kept today: his daughter's laptop. In a hyper-modern thriller told via the technology devices we use every day to communicate, David must trace his daughter's digital footprints before she disappears forever. Stars Cho, Debra Messing. PG-13 – drama, thriller