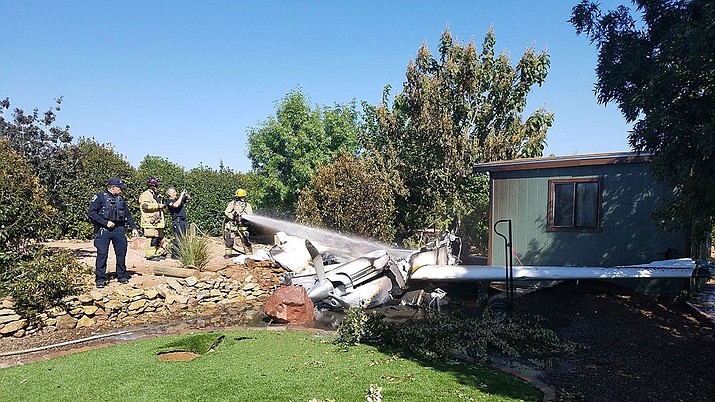 Joseph William Kreiner, 70, of Clarkdale, succumbed to the injuries he sustained in the Sept. 17, 2018 plane crash in the 900 block of Tierra Verde Circle in Cottonwood. (Cottonwood Police Department)

COTTONWOOD — The pilot in Monday’s plane crash in the Tierra Verde Circle neighborhood in Cottonwood has died, according to the Cottonwood Police Department.

A news release by Cottonwood PD Professional Standards Sergeant Monica Kuhlt states Joseph William Kreiner, 70, of Clarkdale, succumbed to the injuries he sustained in the plane crash in the 900 block of Tierra Verde Circle.

“Mr. Kreiner was flown to the Maricopa County Burn Center but was not able to survive the injuries. His family was by his side when he passed,” Kuhlt said in the news release.

Kuhlt said the Federal Aviation Administration and National Transportation Safety Board removed the plane wreckage earlier this week and will conduct the investigation. Mr. Kreiner will be taken to the Maricopa County Medical Examiner’s Office for an autopsy as part of the investigation to determine the cause of the plane crash.

A neighbor, Mike Zemke, said he saw the plane clip the house prior to the crash.

"I thought to myself, it's way too close to for the runway and as the word 'runway' came out of my mouth, it hit the top of the garage there and it landed in the backyard and caught fire," he said.

The fire was extinguished but the residence has minor structural damage, according to Kuhlt. The plane was destroyed.

Monday Kuhlt said the pilot said at the scene that the plane’s engine stopped.