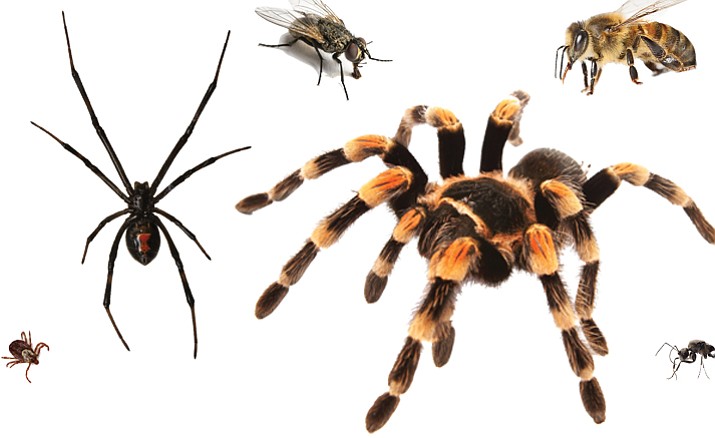 Flies, spiders, bees, ants, mosquitos — it’s no surprise that bugs can be quite annoying and bothersome to many people.

Yet, many bugs are saddled with bad reputations, according to Highlands Center for Natural History Education Director Felipe Guerrero. Some are not as much of a threat as they’re made out to be and all of them have vital roles to play in the ecosystem, Guerrero said.

Here’s a few that he mentioned.

Many species of spider may look threatening, but Guerrero said there’s really nothing to fear about a majority of them.

“Most spiders are completely harmless,” he said. “They eat a lot of insects that we consider a nuisance.”

A recent article in The Daily Courier noted that tarantulas feed on what many consider household pests such as cockroaches, scorpions, earwigs, mosquitos, flies, fleas, moths and other spiders and they can be seen as a natural means of pest control.

The book “Learning About & Living with Insects of the Southwest,” written by Floyd Werner and Carl Olson, states that tarantulas are gentle giants of the spider world and there are several species found in the Southwest. Further, they may have mild venom and impressive fangs, but are unlikely to bite unless they are handled roughly, Werner and Olson wrote.

“Their eyes are incredibly small. Four pairs are located on a small bump in the middle of the cephalothorax,” they wrote. “They can’t be of much use in forming an image, so the tarantula probably isn’t aware you are there if you don’t move or touch its strands of silk.”

Black Widow spiders also get somewhat of a bad reputation, Guerrero said. They may be venomous, but studies have shown it’s difficult to prompt them to bite people, he said.

Honey bees’ reputations have gotten better in recent years with more favorable views on them as pollinators and food producers, Guerrero said. Still, they can sting if provoked and some are allergic to those stings, so it’s not unwarranted to view them with caution.

The European variant of the honey bee is the most familiar and is the only bee seen all over the place except in remote locations, Werner and Olson wrote.

Africanized bees, commonly referred to as Killer Bees are a subspecies of the Honey Bee and look exactly the same except are a little smaller, they wrote. They also have a difference in temperament

“Honey Bees have been domesticated for a long time in Europe and North Africa,” Werner and Olson wrote. “During this long period early beekeepers bred into them a number of traits, including docility, a trait probably suppressed in the Africanized strain.”

The behavior of Africanized Bee includes increased swarming and quick responses to disturbances but their sting is as robust as the honey bee though more workers are drawn into the attack which results in more stings.

House flies get a bad reputation because sometimes they bite and people really hate maggots, Guerrero said. Still, they serve a purpose, he said.

“They provide food for birds and reptiles,” Guerrero said.

House flies are attracted to the odor of food and the larvae or maggots live in and feed on manure or decaying plant material of almost any king if it’s not too wet or dry, Werner and Olson wrote.

The house fly’s habits of regurgitating liquid in order to dissolve solids and alternating between food and manure is what drives people to link them with contamination of food, they wrote, they wrote.

“Watch as a fly lands on a food source and you will see its mouth extend immediately,” Werner and Olson wrote. “Flies taste with their feet and know when food is available in this manner.”

Most have unfavorable views of carpenter ants, Guerrero said. However, they are harmless and excavate in rotting wood for their nest chambers.

“If a carpenter ant is giving you problems in your house, chances are you need to replace that wood anyway,” he said.

Ants are the primary soil workers of the Southwest, aerating the soil for their nests, Werner and Olson wrote. Their work helps to retain soil moisture or drainage and fertilizes and distributes many native plants, they wrote.

“Next time you are cursing ants for being at your picnic, remember those trees providing shade needed their help first,” Werner and Olson wrote.

Both have their bad reputations as parasites, but they do have their place in the ecosystem as food for other organisms such as birds, Guerrero said.

It’s the female half of many mosquito species that suck blood and some species of mosquito do not have a taste for it, Werner and Olson wrote.

As for ticks, the most common variant in the Southwest is the Brown Dog Tick, Werner and Olson wrote. They mostly call dogs host and rarely bite man.