WWI fallen soldiers: More than a Name on a Plaque 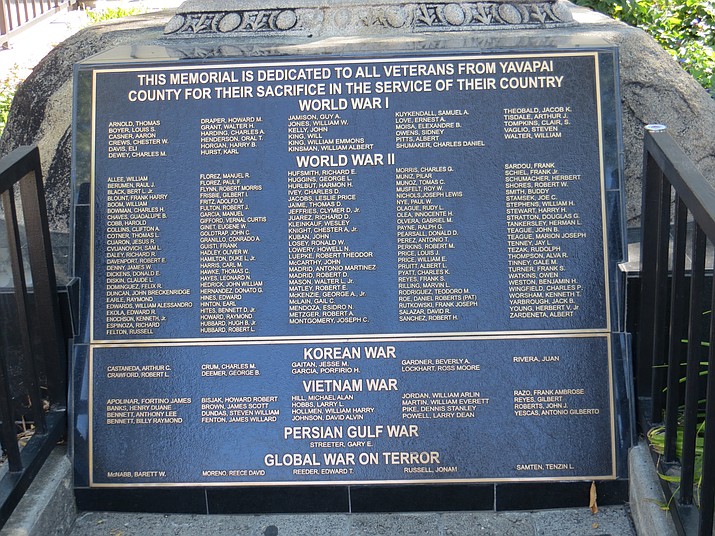 The All Veterans Memorial and Plaque on the courthouse plaza in downtown Prescott. (Courier)

After viewing the WWI exhibit at Sharlot Hall Museum, I couldn’t help but think of the 29 soldiers from Yavapai County who died in combat or from a disease during this horrendous war.

Total U.S. military deaths from all causes was 116,516 and 204,012 were wounded. The centenary commemorations will end on Nov. 11, 2018, and we need to make sure we all remember and keep the history of WWI alive for generations to come.

In 2016, on Flag Day, the All Veterans Memorial Plaque Committee added 32 names to the plaque and 12 of them were from WWI. At that time, in 2016, these 12 had never been honored or memorialized and it took us 98 years to bring this to fruition. I would also like to mention that several of these servicemen were Prescott High School students.

It is very important that we DO NOT let these brave young men fade into history and they should not just remain a name on a plaque/wall. We need to honor the memories of those who fought and died defending our country and our freedom; in fact, it is imperative that we remember them always. Maybe someday we can honor these veterans with a bell ringing and calling of their names to be held in downtown Prescott and if that should happen, I would like to be a part of such a ceremony.

So, the best I can do for them at this time is to introduce them to you.