Preview: SDSU has plenty of concerns going against No. 23 Sun Devils
College Football 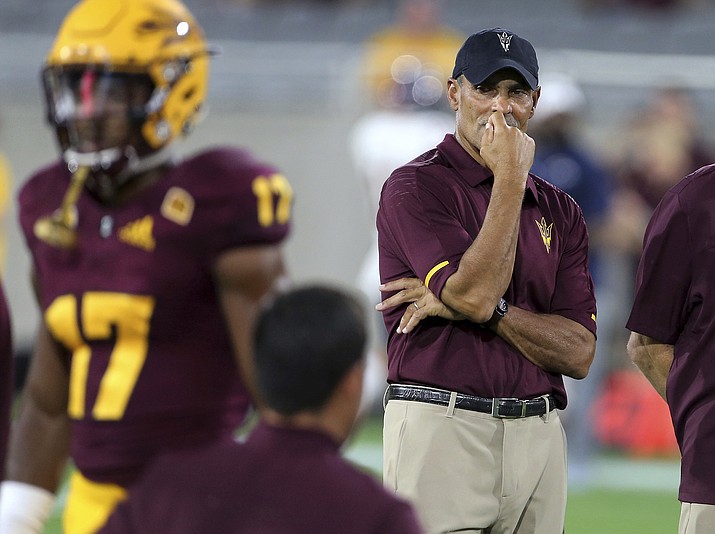 In this Sept. 1, 2018, file photo, Arizona State coach Herm Edwards watches his team warm up for an NCAA college football game against UTSA in Tempe, Ariz. Arizona State rolled over a smaller-conference school in their opener, scoring two quick touchdowns on the way to a 49-7 win over UTSA in Edwards’ debut as coach. Arizona State plays Michigan State on Saturday night. (Ralph Freso/AP, file)

SAN DIEGO — San Diego State coach Rocky Long was driving to work earlier this week when he heard on the radio that the NFL’s Jets knew all the Detroit Lions’ signals, resulting in a 48-17 victory for New York.

Then it hit Long.

That’s one of the costs of SDSU’s success under Long. After the Aztecs went 10-3 last year, new ASU coach Herm Edwards hired away Aztecs defensive coordinator Danny Gonzales to serve in the same role with the Sun Devils. That’s why the Sun Devils will have the signals used when SDSU is playing defense.

“No, all that would do is confuse our players,” he said. “If you confuse your own players, you have no chance whatsoever to compete. We’ll live with the fact that they have an advantage and will try and do the best we can.”

The best he can do is to try to disguise them.

“It’s an opportunity for us, but I’d say we are the big underdogs,” said Long, whose Aztecs will be without injured quarterback Christian Chapman and defensive tackle Noble Hall.

The Sun Devils will look to stay undefeated under Edwards, who played his final season of college ball with the Aztecs in 1976 and graduated from SDSU with a degree in criminal justice.

“It will be a unique contest, I think, for both parties,” Edwards said.

Here are some other things to watch:

Edwards played defensive back for the Aztecs in 1976, when they went 10-1 as an independent. “It’s always fun to go back to San Diego when you’re a California native and you ended up getting your college degree and playing there my senior year,” he said. “Even when I was in pro football, coming back with the Eagles, playing the Chargers, or coaching against the Chargers, obviously always was a lot of fun. I still have a lot of friends who live in San Diego, so it’s always a great opportunity to visit the folks you’ve kind of grown up with and are still living in the San Diego area.”

ASU is looking to avenge a 30-20 loss to the Aztecs in Tempe last season in which RB Rashaad Penny, now with the Seattle Seahawks, had 353 all-purpose yards and three touchdowns. “I see a lot of the same athletes out there, but they’re playing at a much higher and more energetic level than they did last year.

NEW QB: Junior Ryan Agnew will make his first career start for the Aztecs. Agnew came off the bench after Chapman injured his left knee Saturday night and led the Aztecs to a comeback win against Sacramento State, completing 11 of 17 passes for 159 yards.

SDSU’s Juwan Washington has gained 314 yards on 60 carries (5.2 yard average) and scored four times. ASU has the No. 1 run defense in the country, allowing 1.1 yards per rush and just one TD in two games.

ASU got an early signature win under Edwards when it beat then-No. 15 Michigan State 16-13 at Tempe on Saturday night. “Anytime a Pac-12 team plays teams similar, it’s always good to get a win,” Edwards said. “It helps the conference. We play at night and sometimes people on the East Coast don’t watch us a lot. It was a gratifying win for our players. Now, how do we handle beating a team like that? Because we’re about to play a team similar in San Diego State. They have a great program. What Rocky Long has done there is a testament to what kind of coach he is and what these guys have been able to build.”