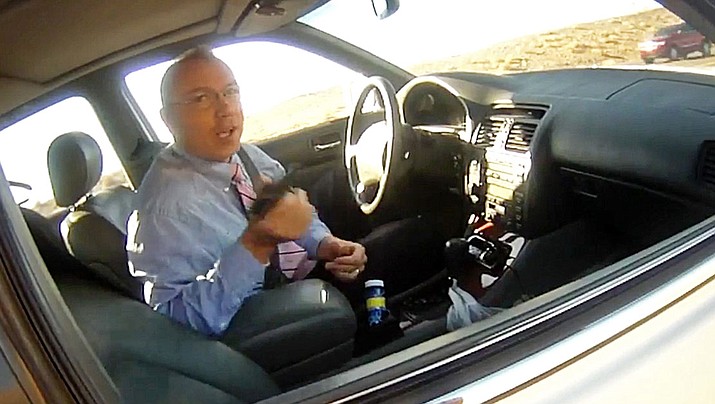 This image made from a March 27, 2018, law enforcement body camera video shows Arizona state Rep. Paul Mosley during a traffic stop outside Parker, Ariz. Records show an Arizona lawmaker already under fire for claiming legislative immunity during a traffic stop for speeding has had similar run-ins with state police, and only got a warning each time. According to Department of Public Safety documents, Rep. Paul Mosley was pulled over by troopers six times since February 2017. (La Paz County Sheriff's Office/KLPZ/ParkerLiveOnline)

According to court documents, the warrant was issued Sept. 6 in Parker Justice Court after Mosley failed to appear to a Sept. 5 court appearance. Mosley, who lives in Lake Havasu City, is charged with excessive speed, the documents show.

When reached at home on Wednesday afternoon, Mosley said he didn’t want to comment about the warrant. He then went on to say he did not know anything about the warrant and is trying to get to the bottom of it. He had not been arrested as of Wednesday night.

In late March, Mosley was pulled over north of Parker on State Route 95 for allegedly traveling 97 miles per hour in a 55 mile per hour speed zone. On video recorded from the body camera of La Paz County Sheriff’s Sgt. Steven Maya, Mosley boasts of driving between 120 and 140 miles per hour during his commute between Phoenix and Havasu. According to the sheriff’s report, he also stated during the incident that he could not be cited because of legislative immunity.

The footage of Mosley’s traffic stop was made available to a local website, Parker Live, and soon went viral, receiving attention and some criticism across the state, nation and world.

“I hope he does the responsible thing and gets this legal matter resolved,” said Sen. Sonny Borrelli upon learning about Mosley's warrant.

According to the Arizona Constitution, lawmakers can be excused from arrest in all cases except treason, felony crimes and breach of the peace. The provision also allows them to avoid civil processes during legislative sessions, including the 15 days prior to each session.

In published reports, House Speaker J.D. Mesnard said he was “disturbed” by the video of Mosley's traffic stop.

“Nothing short of an emergency justifies that kind of speeding, and assertions of immunity in that situation seem outside the intent of the constitutional provision regarding legislative immunity,” said Mesnard, R-Chandler.

In late July, Gov. Doug Ducey signed an executive order stating that legislators could be cited for serious traffic violations as a “breach of the peace.”

Not long after the video made headlines, State Rep. Mark Finchem, a Republican from Oro Valley, filed a complaint with the House Committee on Ethics because Mosley’s “conduct was unbecoming of a member,” he told the News-Herald at the time.

“Ethics complaints become moot when the subject of the complaint is no longer a member of the House of Representatives,” Specht wrote in an email.

Mosely lost his bid for reelection in the Republican Primary held Aug. 28. His term comes to an end at the end of this year. Republicans Regina Cobb and Leo Biasiucci will face Democratic candidate Mary McCord Robinson in the November general election.

On Wednesday, Mosley blamed his loss on what he called the excessive negative news coverage of his campaign, among other reasons.

Mohave County Republican Party Chairman Laurence Schiff, on the other hand, believes Mosley’s March incident to be the source behind his primary election loss.

“Well there was a lot of negative stuff but I don’t think it was reported unfairly…he got caught doing something that he shouldn’t have done and I think that was reported,” he said. “I do think that this (incident) cost him and I kind of think that he’s been, in a way, I think there’s certain argument that he’s been punished enough for a speeding ticket, basically, by losing his seat.”

Because of the incident, the Mohave County Republican Party voted over the summer to censure Mosley, which is a strong statement indicating the party was distancing itself from his campaign.

Arizona state representative brags to officer about speeding by KLPZ