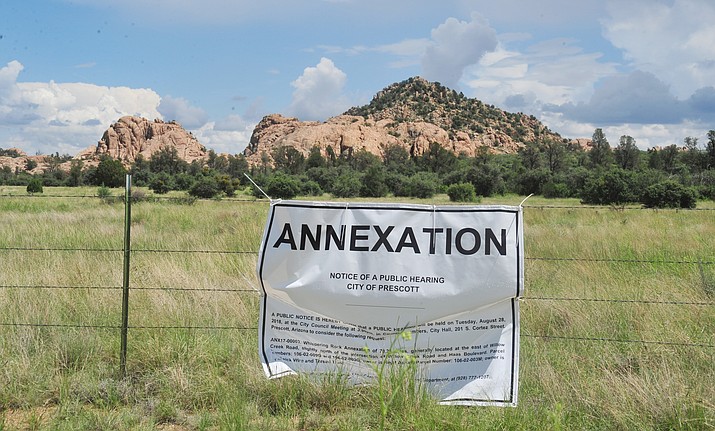 A project envisioned to include a mix of hotels and restaurants, a hospital, 20 to 30 homes, and a tract of Granite Dells open space got a round of approvals from the Prescott City Council this week.

City Attorney Jon Paladini presented a 19-page, pre-annexation and development agreement, as well as a preliminary plat/site plan, which he said would “govern the development of the property.”

Central to the agreement is the mixed-use aspect of the project.

Fronting Willow Creek Road and along on the northern boundary of the parcel, the site plan shows five retail parcels, as well as a hotel parcel.

Then, in the center of the parcel, the plat shows space for “independent & assisted living,” along with space for a hospital.

Local doctor Hojat Askari, the property owner, has said medical uses would be the major focus of the project. He plans a complex that would allow local residents to stay in town for a variety of medical procedures.

While not the main focus of the project, residential uses also are included in the plans. Paladini said the agreement allows for as many as 20 single-family homes, or 30 multi-family homes.

The subdivision plat indicates that the home lots would be located between the assisted-living/hospital space, and the 20-acre piece of Granite Dells rock formations that Askari has indicated would be preserved as open space.

Several other lots on the site plan are designated as “undecided.” While lending some flexibility to future development, Paladini said, the agreement would not allow for residential uses in the “undecided” areas.

“This is not intended to be a housing project,” he said of Whispering Rock, adding that the project would include “Very, very limited residential uses.”

In limiting the residential development, Paladini said the agreement aims to “maximize the public benefit” by adding needed retail, medical, and lodging uses.

“I can’t stress that enough — that this is going to mixed-use, lodging, retail development and a huge portion of open space, and a to-be-determined portion that could be many things, but not residential,” Paladini said.

Located in unincorporated Yavapai County, the parcel was previously zoned for one residential unit per 35,000 square feet. The council’s action rezones the property to the city’s “business general” designation.

The large Granite Dells rock formations on the eastern side of the property will be preserved, Paladini said. As part of the development agreement and the subdivision plat, he said, the 20-acre parcel would be dedicated to the city as open space.

“So we are acquiring Dells-type land, which will have trails through it, at no cost to the city,” Paladini said, adding that the plans also include a half-acre parcel as a trailhead parking lot.

Council members expressed support for the open space and the mixed commercial uses.

“I think the important thing is that it’s generating sales tax,” Councilman Steve Blair said of the project.

“At some point in time, we’re going to be asked to up the manpower for the fire department and the police department, and we have to have a way to pay for that,” Blair said, maintaining that the revenue from the Whispering Rock subdivision “is going to help facilitate that.”

The council voted 6-0 to approve the four actions, with Mayor Greg Mengarelli declaring a potential conflict of interest and not participating in the discussion or votes.