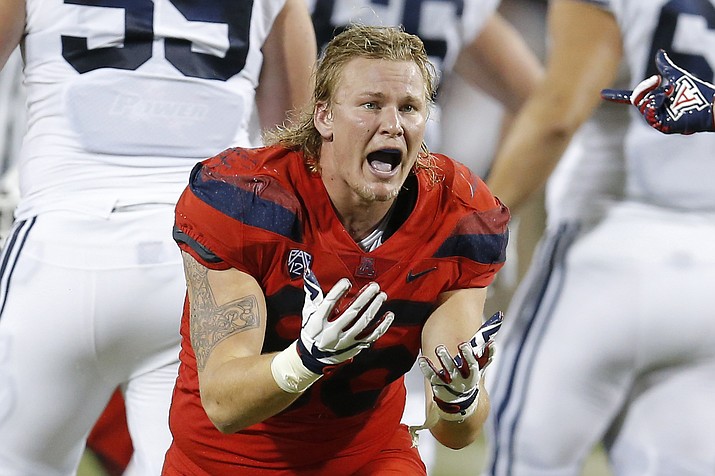 In this Sept. 1, 2018, file photo, Arizona defensive end Justin Belknap gestures in the first half during an NCAA college football game against Brigham Young, in Tucson, Ariz. Arizona was supposed to make a seamless transition to new coach Kevin Sumlin, possibly contend for a Pac-12 South title. Through two games, the Wildcats have done little but struggle under their first-year coach. (Rick Scuteri/AP, file)

Arizona was supposed to be the team in the Grand Canyon State that would have the easiest time transitioning to a new coach. Kevin Sumlin was taking over a program that had a Heisman Trophy front-runner, an explosive offense and the potential to be better on defense.

But while No. 23 Arizona State has won its first two games under Herm Edwards, Arizona is 0-2 under Sumlin and facing a litany of issues.

"When you've lost two games, there's a lot of things you've got to improve," Sumlin said this week. "It's across the board."

Heading into Sumlin's first season, Arizona was being mentioned as a Pac-12 South contender and quarterback Khalil Tate a potential Heisman Trophy winner.

Neither is looking like a possibility through two games.

Arizona got pushed around by Brigham Young's big front lines in its opener, losing 28-23 to the Cougars in Tucson. Hoping for a bounce back, the Wildcats nearly got bounced out of Texas last week, falling behind 38-0 before losing 45-18 to Houston to open 0-2 for the first time since 1981.

Arizona has yet to get Tate untracked, struggled to create big plays and doesn't seem to be any better on defense than it had been under previous coach Rich Rodriguez. The Wildcats host Southern Utah on Saturday hoping to avoid going 0-3.

"We're basically one play away from being what we can be," Tate said. "One catch away, one read away, one breakaway touchdown. It's simple. People just expect things to happen so fast."

Arizona has yet to get it.

The Wildcats' offense was known for churning out big plays, particularly after Tate became the starter last year. So far this season, Arizona's yardage has come in much smaller chunks.

Arizona's biggest pass play so far was 46 yards against Houston after the game was pretty much decided and the Wildcats have three passes of at least 30 yards. Arizona's longest run was 26 yards by J.J. Taylor in the opener and the next-longest is 14 yards. The Wildcats, annually one of the nation's top scoring teams, have 41 points in two games.

"We've got to generate more explosive plays and that's the conversation we've had for the last 48 hours." Sumlin said. "Those explosive plays are a combination of things, but that's something we're working on right now."

He started his sophomore season as a backup and thrust himself into the Heisman Trophy conversation by bursting off one long touchdown after another. Tate led the nation in yards per carry at 9.2 a year ago and had four touchdown runs of over 70 yards.

Sumlin wanted Tate to be more of a passer under his system and that was certainly the case against BYU, when Tate had 14 yards on eight carries. Tate had eight yards on seven carries against Houston, though he was hampered by a left ankle injury suffered in the first quarter.

"The second half he showed he was going to help the team by fighting through this deal," Sumlin said.

Arizona's defense needs to put up a little more fight.

The Wildcats have had one of the nation's worst defenses in recent years, but were expecting improvement with a solid core of returning linebackers and more size up front.

Arizona got pushed around early against BYU before pushing back a little. The Wildcats were overwhelmed by Houston, giving up 297 yards rushing and 551 total.

Arizona has yet to register a sack or a takeaway through two games.