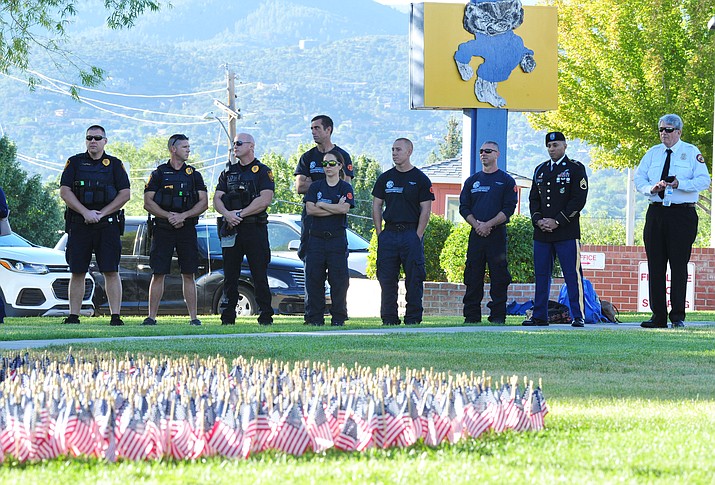 Flags for each person who died during the attcks on Sept. 11, 2001 surround the flagpole for Prescott High School's 9/11 ceremony Monday Sept. 11, 2018 in Prescott. (Les Stukenberg/Courier)

A postcard pretty day reminiscent of the same day 17 years earlier was the setting for Prescott High School’s Tuesday commemoration of the 9/11 terrorist attacks that congealed a nation to thwart evil.

In a short, yet poignant annual remembrance organized through the school’s JROTC program, students gathered with school, law enforcement and other civic leaders around the front flagpole ringed with 2,996 miniature flags to represent all who perished that day.

Nineteen terrorists orchestrated an attack that sent two jetliners into the Twin Towers of the World Trade Center, one into the United States Pentagon in Arlington, Virginia, and a final flight that crashed in a Pennsylvania field when passengers attempted to abort the terrorists’ mission. 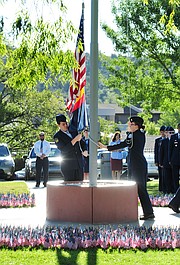 Most Prescott High students were not alive, or were infants, when the attacks occurred. Still, they see 9/11 as a slice of American history that cannot be forgotten. The legacy of so many everyday heroes is one they hope they honor through their daily deeds, several said.

“This marks a very, very sad day in history,” said JROTC honor guard member Dakota Baughman, a junior, just 6 months old when the attacks occurred. “I’m here to do my best to honor all those who passed away. My heart goes out to all who mourn this day.”

As for lessons learned, Baughman said he believes the best way to celebrate the heroism and sacrifices of that day, and those that followed as part of the war against terrorism, is to “stand together” regardless of one’s race, religion or socio-economic background. From a military family, Baughman said he, too, intends to serve his country; his intention is to go to the United States Air Force Academy.

“We all need to be able to ban together,” Baughman said of how America’s strength and resilience depend on such unity. “We are one of the greatest countries in the world. We should stick together more than we do.”

“Taps” bugler, junior Lila Keane, counted it a privilege to perform the melancholy notes signaling the close of a ceremony that gives recognition to all that was lost on that fateful day.

“It’s sad, absolutely, but this is also a way to recognize how terrible events can bring our country together, and the great things we can do as a community when we come together,” Keane said.

As an educator, Goligoski said his hope for the future came from watching high school students and athletes embrace community and service to others. As one of two of the speakers, Goligoski cited members of the 19 Granite Mountain Hotshots who left a heroic legacy for this community, sacrificing their lives to fight an out-of-control wildfire in 2013.

Before the official service, Prescott Unified District Superintendent Joe Howard said 9/11 was a defining day in America that “redefined” Americans.

He said he remembers vividly the beauty of the day juxtaposed to the news chronicle of the unfolding terror around the nation. As a then-assistant principal in Chino Valley, Howard said he most remembers how teachers and administrators tamped down their own emotions so as to be “leaders for kids.”

“And it was tricky,” he admits.

The high school ceremony to honor the heroes of that day “is one of the best things we do,” Howard said.

Granite Peak Unitarian Universalist Interim Pastor Terry Cummings, a World Trade Center survivor, was invited to share some of her reflections and an invocation.

Granite Peak Unitarian Universalist interim Pastor Terry Cummings speaks at Prescott High School's 9/11 ceremony Monday Sept. 11, 2018 in Prescott. Cummings had an office on the 85th floor of the World Trade Center and was in the building when the first plane struck the tower 17 years ago. (Les Stukenberg/Courier)

She said what is most etched in her memory is the sight of hundreds of emergency responders “fearlessly and selflessly” entering the burning tower to save the lives of strangers. She said she will never forget the cheerful, and confident, countenance of those first responders whose diversity reflected the “melting pot that is New York City.”

Less than an hour later, the Twin Towers collapsed, one after the other, and 345 firefighters and 71 police officers were counted in the final tally of the terrorists’ victims.

Cummings prayed for forgiveness, suggesting those who harbor anger and hate suffer all the more. She prayed for peace so future generations need not make similar sacrifices.

She offered thanks for freedom.

“May we always be thankful,” Cummings concluded.