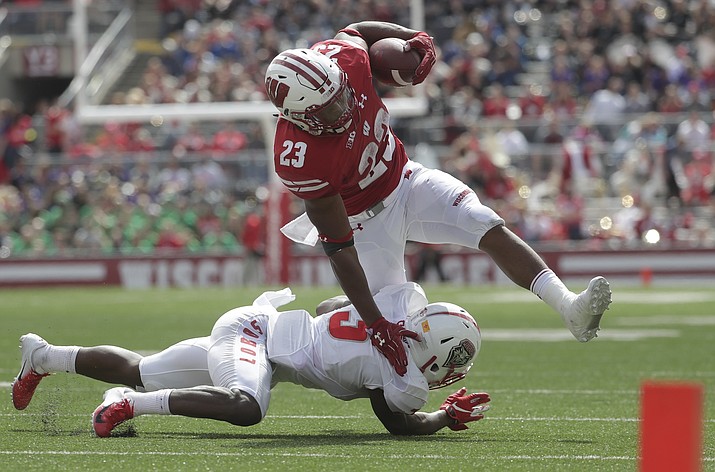 —Jonathan Taylor, Wisconsin, ran for a career-high 253 yards and three TDs to help the No. 5 Badgers beat New Mexico 45-14.

—Jordan Ta'amu Mississippi, threw for 448 yards and five TDs and the Rebels survived an upset scare by beating Southern Illinois 76-41.

—Brett Rypien, Boise State, threw for 362 yards and three TDs in little more than a half, and the No. 20 Broncos routed UConn 62-7.

—Eric Dungey, Syracuse, tied a school record with five TD passes in a 62-10 rout of Wagner.

—Will Grier, West Virginia, threw for 332 yards and four TDs to lead the No. 14 Mountaineers to a 52-17 victory over Youngstown State.

—Justin Herbert, Oregon, threw for 250 yards and four TDs before heading to the bench in the third quarter, and the No. 23 Ducks routed Portland State 62-14.

—Taryn Christion, South Dakota State, passed for four TDs and ran for another to help the Jackrabbits beat Montana State 45-14.

—Akevious Williams, Bethune-Cookman, accounted for five TDs as the Wildcats set a school record for points in a 79-16 victory over Virginia University of Lynchburg.

Tua Tagovailoa got Alabama rolling with a long touchdown pass, then another and another. Then he handed the reins to Jalen Hurts for pretty much more of the same.

Tagovailoa passed for three first-quarter touchdowns and Hurts added two more before halftime, a quarterback duet that was good enough to lead the top-ranked Crimson Tide to a 57-7 victory over Arkansas State.

The Tide (2-0) racked up big plays on the way to a 40-0 halftime lead while rotating the quarterbacks who battled for the job throughout the offseason. Coach Nick Saban officially announced Tagovailoa would remain the starter Monday, but both were big parts of the plan again.

It's the first time since 1925 Alabama has scored 50-plus points in each of its first two games. The combined six touchdown passes total was tied for second-most in Alabama history, matching Hurts and Tagovailoa's tally against Mercer last season.

Kansas finally won on the road.

Freshman Pooka Williams rushed for 125 yards and two touchdowns as the Jayhawks snapped the second-longest road losing streak in college football history at 46 games with a 31-7 win at Central Michigan .

Central Michigan quarterback Tony Poljan was intercepted four times by Kansas (1-1), which won on the road for the first time since Sept. 12, 2009. The Kansas streak was only topped by Idaho State, which lost 48 straight through 2014.

9_Touchdowns by Stetson in its 63-21 win over Waldorf, a school record.

77_Margin of victory by No. 22 Miami in its shutout over Savannah State, setting a school record.

100_Career wins by Mercer coach Bobby Lamb after a 45-3 win over Jacksonville.

900_Wins as a program by No. 4 Ohio State after rolling over Rutgers 52-3. The Buckeyes join Michigan as the only programs with 900 wins.

Kentucky ended one of college football's longest losing streaks by upsetting No. 25 Florida 27-16 in the Swamp.

Terry Wilson accounted for three touchdowns, Benny Snell ran for 175 yards and the Wildcats beat the Gators for the first time since 1986. Kentucky hadn't won in Gainesville since 1979.

The Wildcats had lost three of the last four meetings by six points or less, a strong indication they were closing the gap.