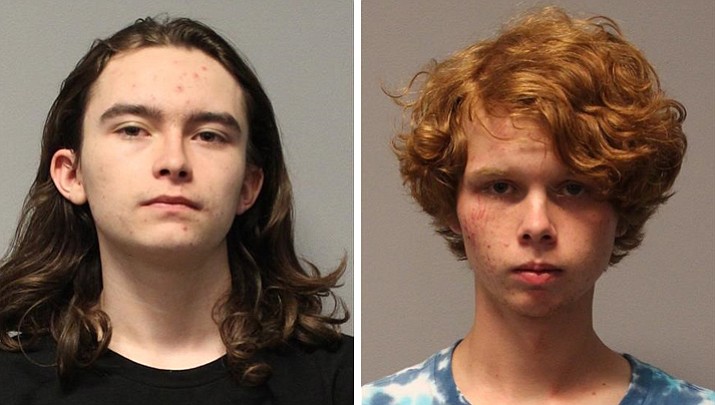 Franky Lopez, 18, left, and 18-year-old Trinity Trunick along with another 16-year-old male were arrested Aug. 28 after shooting a Smith and Wesson 38 Special at Fain Park in Prescott Valley. (PVPD/Courtesy)

On Aug. 28 at about 4 a.m., Franky Lopez, 18, Trinity Trunick, 18, and a 16-year-old boy were arrested for firing a gun in town limits and disorderly conduct with a weapon at Fain Park in Prescott Valley.

Prescott Valley Police responded to Fain Park regarding shots fired. Witnesses reported three subjects getting into a red Jeep Cherokee and quickly leaving the park. Officers were able to make a traffic stop near 2nd Street and 3rd Street in the Town and Country Industrial Park of Prescott Valley.

The investigation revealed that Lopez, Trunick, and the 16-year-old had been shooting guns while at Fain Park. A Smith and Wesson .38 Special was recovered from the vehicle.

While investigating, officers discovered that a resident’s garage in Prescott Valley had been broken into and their firearms had been stolen. Officers confirmed the .38 Special was the same gun that had been stolen. An AR-15 was also reported stolen, however, the weapon was not found in the vehicle or at Fain Park.

Later in the morning, there was a report of a resident from Stoneridge Community of their home being damaged by a bullet. It is being investigated if the bullet came from the earlier shots-fired incident.

Franky Lopez and Trinity Trunick were arrested and booked at Yavapai County Sheriff’s Office on charges of unlawful discharge of a firearm, criminal damage, possession of a stolen property, endangerment, possessing/transporting a prohibited weapon and trespassing on town property. Trunick was also arrested and booked for alcohol- and DUI-related charges.

The 16-year-old boy was arrested and booked at the Juvenile Detention Facility in Prescott on charges of unlawful discharge of a firearm, criminal damage, possession of a stolen property, endangerment, possessing/transporting a prohibited weapon, trespassing on town property, and minor Illegally in possession of a loaded firearm.

If anyone has any information regarding the missing AR-15 please contact Detective B. Hohrein #107 at Prescott Valley Police Department.