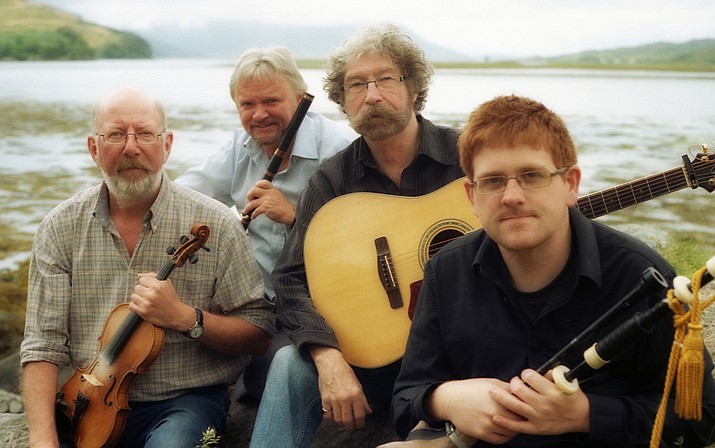 The Tannahill Weavers have been a group for 50 years performing tradtional Scottish music. (TannahillWeavers.com/Courtesy)

Scotland’s premiere traditional band, the Tannahill Weavers, are touring across the United States in celebration of their 50th year as a band and one stop is right here in Prescott as part of the Celtic Concert Series.

“How many bands have you heard of that have been together that long,” said Celtic Concert Series Director Dave McNabb, noting there was another band which was considered the top Scottish band but called it quits after 40 years and never toured the United States. “This band, the Tannehill Weavers, have spent 50 years playing and everyone in Scotland knows them.”

Performing at Trinity Presbyterian Church, 630 Park Ave, at 6:30 p.m. Sunday Sept. 9, the Tannahill Weavers will present what has been called a diverse repertoire that spans the centuries with fire-driven instruments, topical songs and original ballads and lullabies able to be enjoyed by people of all ages, according to a news release provided by McNabb.

“These versatile musicians have received worldwide accolades consistently over the years for their exuberant performances and outstanding recording efforts that seemingly can’t get better…yet continue to do just that,” the release states. “The Tannahills have turned their acoustic excitement loose on audiences with an electrifying effect. They have that unique combination of traditional melodies, driving rhythmic accompaniment, and rich vocals that make their performances unforgettable.”

This year, the Celtic Concert Series has had fewer concerts than in other years due to government bureaucracy making it harder for bands to come to the United States and play and make a profit, McNabb said. Having Tannahill Weavers perform is a highlight of the season, he said.

“It was kind of compensation for not having as many concerts this year as we’ve had in the past,” McNabb said.

Still, even though there hasn’t been as many shows, all the concerts have reached an average of about 100 people, he said.

Tickets are $25 for general admission, $10 for college students and free for youth 18 and under, done to encourage younger people to experience the music, McNabb said.

“We’re hoping that they’ll like it, be hooked and come back as adults,” he said.

The show is more than just music. The local Irish dance troupe has been invited and could be dancing in the aisles, McNabb said. There’s also some really good door prizes, such as Scottish books donated from Book Nook and tickets to the Highland Games.