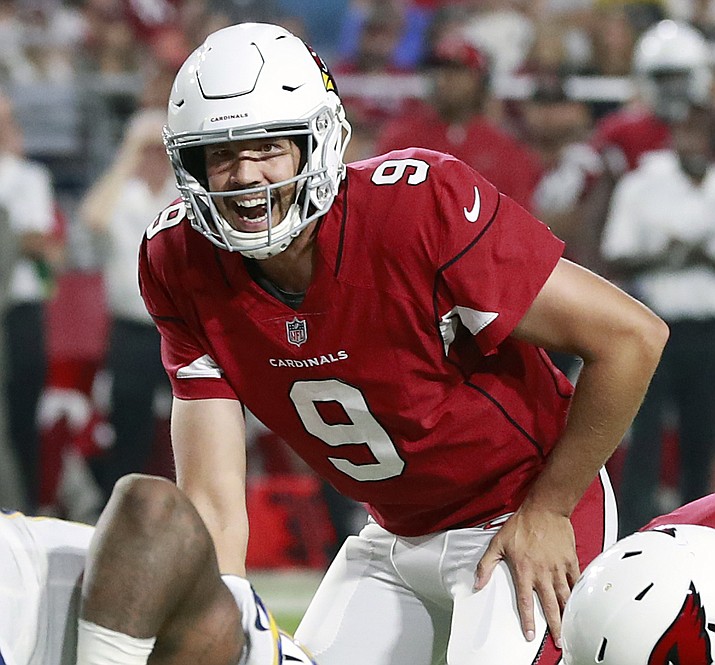 Arizona Cardinals quarterback Sam Bradford (9) calls signals during the first half of an preseason NFL football game against the Los Angeles Chargers, in Glendale, Aug. 11, 2018. After easing his way through training camp and the preseason, Sam Bradford is ready for the real thing as he returns from yet another injury, leading the Cardinals into their season opener against Washington. (Rick Scuteri/AP Photo, file)

TEMPE — If another injury comes, Sam Bradford says, there is nothing else he could have done in his preparation for the coming season to avoid it.

Approaching Sunday’s debut as Arizona Cardinals quarterback, Bradford said Wednesday his battered left knee “does feel as good as it has felt in a long time.”

“I’ve done everything in my power to put myself in this position,” he said. “If something happens and it doesn’t hold up, I’m going to hold my head high knowing that I put my body and myself in the best position to succeed.”

The Cardinals eased Bradford along, limiting his work in the offseason and giving him regular days off in the preseason. Now it’s time for the real thing, Bradford leading his fourth team in six seasons.

“I think he’s at a great place right now,” said coach Steve Wilks, himself making his Cardinals debut Sunday. “I talk to him daily just to see how he’s doing. Most importantly, just the mental aspect of it. From a physical standpoint, I think he’s great. I think the knee is strong. He’s at a good place right now and had a good practice today.”

Bradford, limited to 80 games in eight NFL seasons, has acknowledged going through a dark time after his latest injury, which sidelined him in the second game for Minnesota last season. He appreciates this chance to start again.

“At this time, you just realize how special each game is,” Bradford said.

“It is truly a blessing to be out there every Sunday, every time that you get on the field with your teammates after having gone through some of the injuries that I have.

“Having not been able to be out there, I don’t think you take it for granted at all. You realize how special it is and how unique of a position we’re in to be able to do what we do and really with the mindset of just trying to make the most of it.”

The injuries have been well-documented for the player who was the No. 1 overall draft pick, by the St. Louis Rams, in 2010 after a stellar career at Oklahoma.

His first knee injury came seven games into the 2013 season. Another in a preseason game in 2014 wiped out that entire year. But he has shown how effective he can be when he is healthy.

He played 15 games for the Vikings in 2016, completing 72 percent of his passes for a career-best 3,877 yards and 20 touchdowns with five interceptions.

Then came 2017 and another injury.

The Cardinals were in dire need of a quarterback when Bradford was signed. They’d lost Carson Palmer to retirement, while Drew Stanton and Blaine Gabbert weren’t re-signed. Arizona brought in Mike Glennon as the backup before pulling off a draft-day surprise, moving up to select Josh Rosen 10th overall.

Bradford is widely seen as the caretaker until Rosen is ready to become the franchise quarterback. A big season might delay that inevitability.

“I see when he’s healthy early in the season, the first game of the year — every time he’s been healthy — he’s a very accurate, precise quarterback,” said Redskins coach Jay Gruden, who leads Washington into Arizona on Sunday.

“I think nobody can doubt that his arm is very talented. I think he’s had a couple injuries as of note that has probably slowed his progress down a little bit. He’s been on a few different systems and teams, but I think if you protect Sam Bradford and you give him time to throw, he’s as good as anybody, really. He’s got a great, accurate arm.”

“I think there’s going to be a lot of excitement, to be honest,” he said. “Just to be able to play football again, to get back on that field, it was great to get through today and getting back in the regular-season mode. Last night, the night before, getting back into the work and the routine that I’m used to and the things that I’ve done in the past.”

Maybe someday, he said, injuries won’t be such a big part of his story.

“I hope that one day maybe you guys will stop using that phrase or stop asking those questions,” Bradford said, “but I think at this point, I understand it and realize that it just kind of comes with it.”

NOTE: Although Wilks had said DE Markus Golden (knee) had a limited workout Wednesday, the official injury report said Golden did not practice. Wilks said it’s been his experience that if a player can’t practice by Thursday, he won’t play.