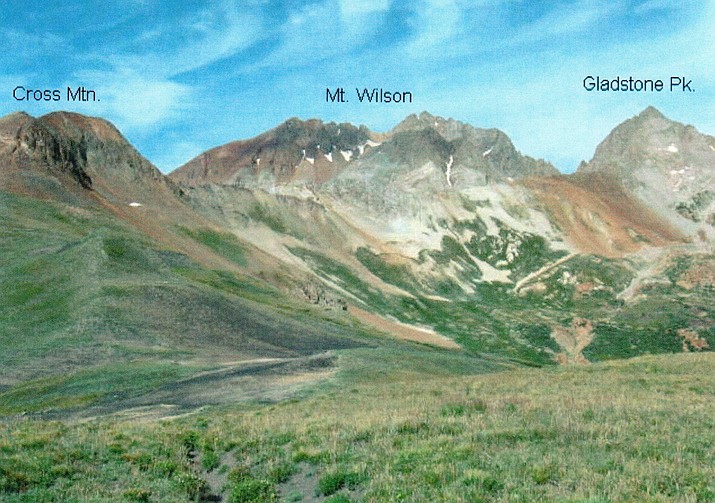 I feel a change in the weather coming, signaling the end of summer. However, autumn is still many weeks away, especially across the Southwest. Weather forecasts predict temperatures above 100 degrees in the Sonoran Desert for days and days.

Therefore, hikers would do well to remain focused on higher elevations for the foreseeable future. Consequently, I will continue the path upward, encouraging you to consider a spectacular hike next door in Colorado.

Hiking guides/directories come in all shapes, sizes and formats. While I prefer electronic guides for timely information, I still like to consult print guides for ideas, such as the one by James Dziezynski in 2012. The title is: “Best Summit Hikes in Colorado: An Opinionated Guide to 50+ Ascents of Classic and Little-Known Peaks from 8,144 to 14,433 feet.”

While I don’t align myself with some of Dziezynski’s philosophical opinions, his opinions about what makes a good hike are spot on.

Cross Mountain is not noteworthy for its lofty summit or majestic profile. Quite the opposite. It is little more than a rusty mound/ridge, hardly noticed among more stately peaks. That’s the unexpected magic of this enjoyable day hike. It’s not the summit itself, but what you see from its summit.

To the north lie the majestic profiles of Mount Wilson and Gladstone Peak. To the east stands Lizard Head. And beyond these immediate summits, dozens of other peaks and valleys spread out before you in a spectacular panorama.

The trailhead is at 10,000, so, right below timberline. It is conveniently situated right on Colorado Highway 145 between Telluride and Cortez, about 12 miles north of Rico, Colorado. The setting is pastoral, peaceful, lush and breathtaking. I was the only one there when I arrived early in the morning. However, that was not the case when I returned a few hours later.

On my way back, I noticed that someone had dug up mushrooms here and there. Sometimes the ground was disturbed with no sign of what was removed. In other places, a mushroom was left, as if discarded once it was dug up. When I got back to the trailhead, I found the reason.

There is a small stream at the trailhead and three young men were dancing in the water barefoot. I sat down on the tailgate of my truck to change shoes when one of them approached me and asked if I wanted to try some mushrooms.

They had gathered some to sell to local restaurants. They did not have a great deal of experience doing this, but they were pretty confident of their ability to identify each species, at least the tasty ones. I declined, telling them I preferred to stick with well-known flowering plants. They understood and went back to dancing in the water.

Trail 637 is a short hike (about 4 miles one way) to an easy scramble off the official trail. The wildflowers are still vibrant and diverse, and some are going to be in fruit around Labor Day weekend. There’s not as much water along the trail as I had expected and, of course, thunderstorms are a concern. Lots of camping options may be found in the backcountry, as well as more civilized lodging in nearby towns.

Next: Hiking beyond 12,000 feet to the Summit of Wheeler Peak, New Mexico.

Johnson: Quick trip up Guadalupe Peak in Texas offers fresh scenery
Johnson: Making our way through Wheeler Peak
Town offering a hike to one of region’s top trails
Johnson: Exploring Weatherford Loop, be prepared
Johnson: Hiking trails in the fall a favorite activity for many