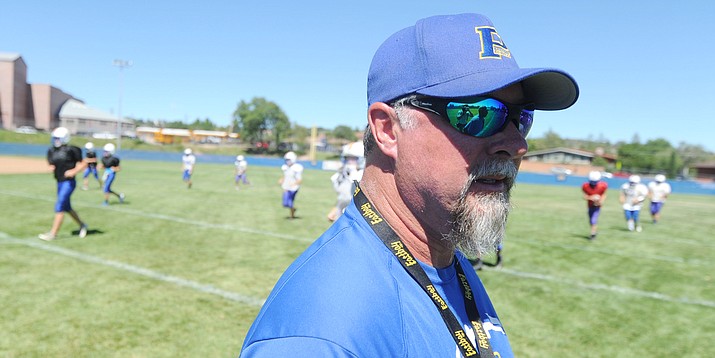 In an email statement sent by Mark Goligoski to the media Wednesday night, the first-year principal at Prescott High School said the administration had completed their investigation into an incident that took place between an assistant coach and a player after practice a week ago.

“[We have] stressed that adult employees yelling and swearing at students has never and will never be tolerated in the Prescott Unified School District,” Goligoski said in the statement. “A team culture that has and will allow this is not quickly or easily reversed and shows a philosophical rift from the vision of the district.”

Gilpin was placed on leave Aug. 30, a day before the Badgers (1-1, 0-0 Grand Canyon) were set to travel south to Phoenix and play Moon Valley in Week 3, a game they eventually won 43-0.

The investigation, reportedly conducted by Prescott Athletic Director Missy Townsend, district Superintendent Joe Howard and Goligoski, has not named the assistant coach, or the player involved in the incident Aug. 29.

Gilpin, 13-8 overall as the head coach of the Badgers, including a 7-3 campaign in 2017, said in the statement provided by Goligoski via email that he did not “come to this decision easily.”

“There are many amazing young men and families associated with the program that I feel I am letting down by resigning. It is my hope that the current division in the program will be melded into a cohesive team by me leaving,” Gilpin said in the statement. “While I will not shoulder all the blame for the division, as head coach, I will accept all the responsibility. I would like to thank PUSD for giving me the opportunity to lead this program for two wonderful seasons.”

Gilpin issued a statement via email the morning of Aug. 31, a day after he was put on leave, saying he was not part of the confrontation between assistant coach and player, but instead “diffused the situation” by getting in the middle of the two, having them separate to calm things down and figure out what happened.

When asked during a conference call Aug. 31 if there was more to the incident not being revealed, or if there were prior factors involved in the investigation, both Goligoski and Townsend could not comment.

Assistant coach Cody Collett, who spent four seasons as head coach of the Badgers from 2012-2016 and amassed a 27-14 record, will take over the head coaching duties for the remainder of the season, Goligoski said.

“He is an experienced high school football coach who has extensive knowledge of the PHS program,” Goligoski said. “Coach Collett is committed to unifying the team and keeping the team focused on respecting high standards on and off the field.”

Collett returned to the Prescott sidelines as a tight ends coach under Gilpin in 2017.

In a phone interview Wednesday night, Collett said it's important now that the players remain “focused on one day at a time.”

“It’s obviously difficult circumstances, but the kids have been focused this week on the task at hand. That’s a credit to their character,” Collett said.

When asked if he plans to revamp several components of the program or keep it business as usual, Collett said there are lots of good things that have been put in place throughout the years.

“We’ll try to maintain the consistency of the program,” Collett said. “Right now, we want the kids to play hard and enjoy the game of football. That’s our No. 1 goal.”