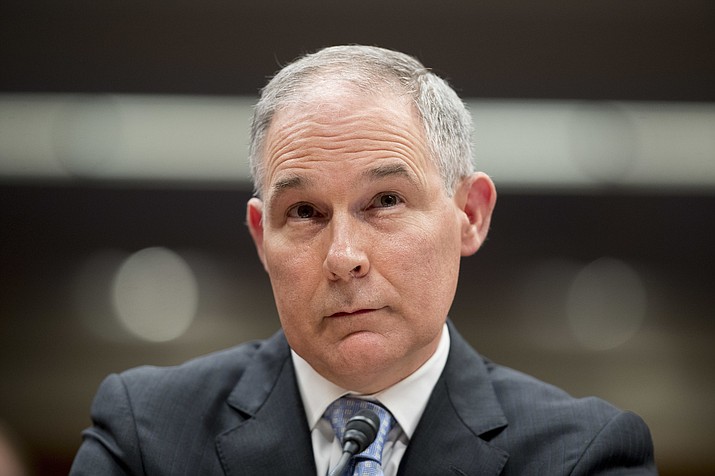 In this May 16, 2018, file photo, Environmental Protection Agency Administrator Scott Pruitt appears before a Senate Appropriations subcommittee on the Interior, Environment, and Related Agencies on budget on Capitol Hill in Washington. President Trump tweeted Thursday, July 5, he accepted the resignation of Pruitt. (AP Photo/Andrew Harnik, File)

WASHINGTON — The Environmental Protection Agency had no proper justification for spending more than $3.5 million on round-the-clock security for former head Scott Pruitt, including nearly $1 million in travel costs for his bodyguards, the agency's internal watchdog concluded on Tuesday.

The EPA allowed Pruitt and his team to increase the security detail from six agents for Pruitt's predecessor to 19 for Pruitt without proving the need, "an undocumented decision (that) represents an inefficient use of agency resources," the EPA Office of the Inspector General concluded.

According to the EPA inspector general's report, Pruitt's security costs were more than double those of his predecessor, Gina McCarthy, during her last year.

Travel costs for Pruitt's bodyguards more than tripled, to $739,580, from February 2017 to December 2017, owing to Pruitt's insistence on 24-hour-a-day security and on premium-class travel for himself and a bodyguard, the report said.

Pruitt left the EPA this summer amid a barrage of scandals over his spending and other allegations of abuses of office.

The EPA did not immediately comment on the report. The inspector general's report says the agency contended "the level of protection is an administration decision, informed by the awareness of risks and the potential impact of those risks to the efficient functioning of the agency."

Pruitt, a Republican, had been regarded by many conservatives as one of the more effective members of President Donald Trump's Cabinet. His July resignation came days after two of his closest advisers spoke to House oversight committee investigators and revealed new, embarrassing details in ethics scandals involving him.

Pruitt expressed no regrets in his resignation letter to Trump.

"It is extremely difficult for me to cease serving you in this role first because I count it a blessing to be serving you in any capacity, but also, because of the transformative work that is occurring," Pruitt wrote. "However, the unrelenting attacks on me personally, my family, are unprecedented and have taken a sizable toll on all of us."