Cantlon: Nuns are back on bus tour, this time targeting tax cuts 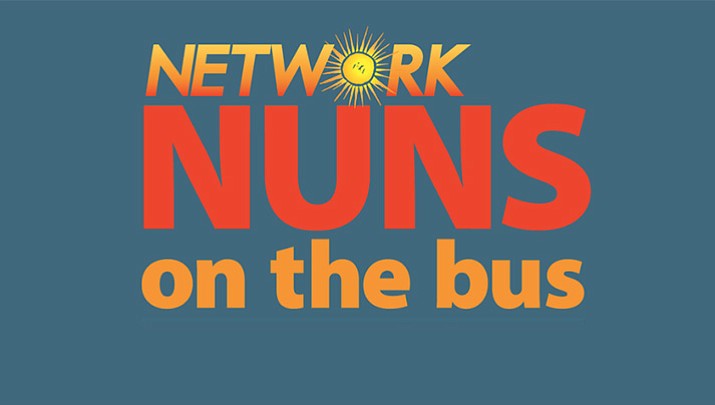 The Nuns on the Bus are at it again. They’re doing another tour to raise awareness about the negative effects of the 2017 tax cut, which mostly benefited corporations and the top (wealthy), and the efforts to undo access to health care.

The Nuns on the Bus are at it again. Back in 2012, I interviewed Sister Simone Campbell who leads the Nuns on the Bus, which is their effort to raise awareness on issues of social justice. The tour is a project of Network, which is a large organization of Catholic nuns who focus on issues like housing, access to health care, and economic fairness.

In 2012, they toured the country raising awareness of the cuts to social services in the budget proposed by Rep. Paul Ryan, R-Wis. They made enough of a splash that she was interviewed on the Colbert show and spoke at the Democratic National convention. I interviewed her when they came to Arizona and made a stop in Prescott.

They’re doing another tour to raise awareness about the negative effects of the 2017 tax cut, which mostly benefited corporations and the top (wealthy), and the efforts to undo access to health care. They will be in Phoenix and Tucson on Oct. 10-11, holding town halls and visiting congressional representatives’ offices, including Martha McSally. See the tour schedule at this link. They will zig-zag the country doing more of the same, leading to a demonstration at the Mar-a-Lago resort in Florida in November.

I talked with Sister Simone about their trip. She comes from a background steeped in activism for social justice. In fact, that’s the name of the order she’s a member of, the Sisters of Social Service. She became a nun and a member of that order and then got her law degree. She founded and led the Community Law Center in Oakland, serving the working poor.

To give some of the flavor of their concerns about the cuts going mostly to the top, and the new proposed budget which would cut services in part because of the tax cut, here are some quotes from my interview and from their supporting documents.

“As people of faith, we advocate for reasonable revenue for responsible programs.”

“Instead of investing in our shared future and ensuring that every person and business contributes their fair share towards the common good, Congress enacted a tax law that is disastrous for workers, middle-class families, small businesses, and our economy.”

“The tax cuts went directly to the wealthiest people and corporations and stayed there.”

“A just tax system should help us build a more equitable society and begin to reverse the damaging inequality created by prior tax breaks designed to benefit the wealthiest.”

“Tax rates should be progressive and everyone should pay their fair share.”

“Tax revenue should pay for valuable public investments and set us on a sustainable path.”

Their tour will end with, “A celebration of what is good about our nation, to come together. What really makes a difference, it’s community, it’s not benefiting the wealthiest. That sucks the life out of our nation. This is all about being our better selves and ending the lie, the unpatriotic lie, that we are based in individualism. We are based in community. That’s what we need to emphasize. It’s, ‘We the people’, not, ‘I the individual.’”

Tom Cantlon is a local business owner and writer and can be reached at comments at tomcantlon dot com.