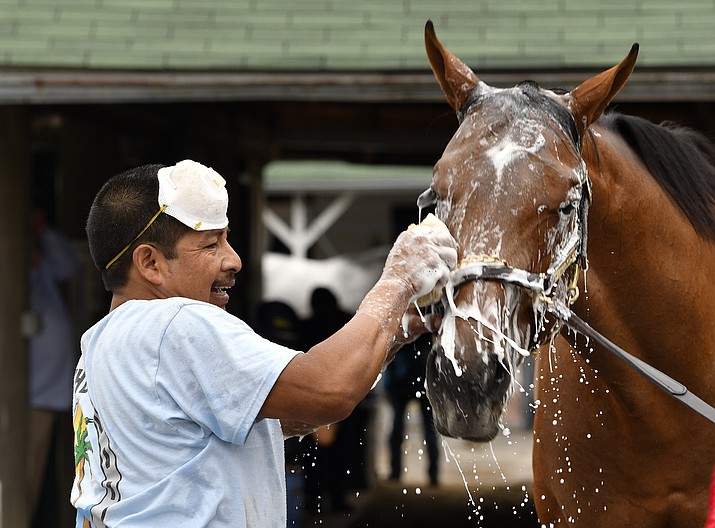 Groom Cesar Abrego, who came to the U.S. from Guatemala on an H-2B visa, gives a bath to one of the horses being trained by Dale Romans following his morning workout at Churchill Downs, Wednesday, April 19, 2017, in Louisville, Ky. (Timothy D. Easley/AP Photo file)

Trying to figure out how many employment-based visas the State Department issues is a dizzying task.

The major categories include the H, temporary workers; the TN, NAFTA professionals; the P, athletes, artists and entertainers; the L, intercompany transfer; the O, extraordinary ability, and on and on. In most cases, spouses and minor children can enter with the primary visa holder, and most spouses are work-authorized.

State Department statistics show that the total number of temporary employment-based visas issued generally has increased since fiscal year 2000. A dip followed the 2008 Lehman Brothers failure and related financial shocks, but there’s been a steep trend up since. About 800,000 work-related visas are issued annually.

Add to the 800,000 the more than 1 million legal, permanent, employment-authorized immigrants that arrive every year, and the result is a constantly expanding, foreign national workforce whose presence makes it more challenging for American citizens to find good jobs or keep the ones they have. In 2016, 1.5 million foreign-born came to the U.S., up from 2015’s 1.38 million.

Although the annual totals are staggering, the challenge comes not so much in a single year, but in immigration’s autopilot nature, and the near impossibility to move Congress from its donor-dependent, expansionist mindset to put American workers and their families first. Especially vulnerable are lower-skilled, underemployed Americans with only a high school education.

Since 1965, Congress has quadrupled immigration. Yet, just before Congress recessed, House Republicans Dan Newhouse of Washington and Andy Harris of Maryland introduced amendments that would expand the numbers of H-2A temporary agricultural visas and H-2B non-ag visas used in landscaping and the hospitality industry.

Despite employers’ insistence that they’re fully dependent on foreign labor and that their businesses will fail without imported workers, another less savory reason motivates many to use visa workers – cheap labor.

Three Democrat-led commissions warned against allowing more H visa workers who could be exploited. First, Congress’ 1979 Commission on Immigration and Refugee Policy, chaired by University of Notre Dame president Rev. Theodore Hesburgh, concluded after an 18-month review that, among other negatives, more H visas would establish “a second class of aliens … in our country who are not fully protected by the law and its entitlements and who could not participate effectively in mainstream institutions.” The Rev. Hesburgh’s study also correctly predicted that temporary visa increases would “stimulate more migratory pressures… .”

Third, Texas Democrat and U.S. Representative Barbara Jordan, who studied immigration policy for six years under President Bill Clinton and chaired the 1990 Commission on Immigration Reform, found that “guest worker programs depress wages, especially for unskilled American workers, including recent immigrants who may have originally entered to perform needed labor but who can be displaced by newly entering guest workers.”