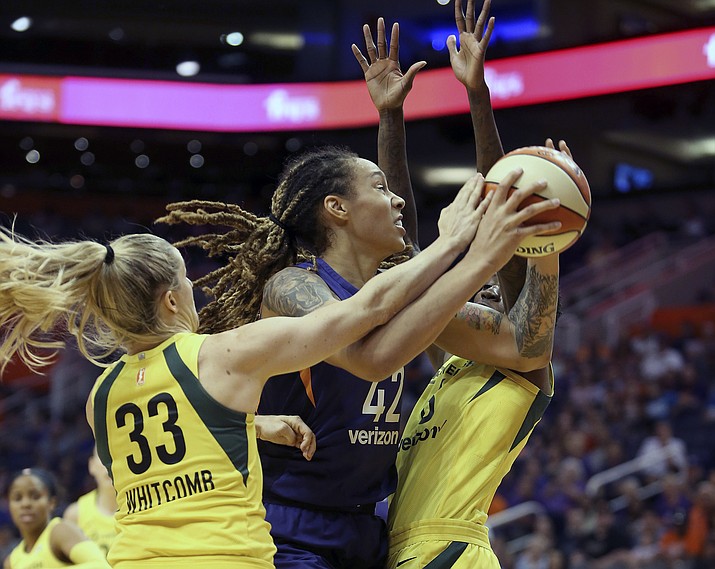 Phoenix Mercury center Brittney Griner (42) is guarded by Seattle Storm's Sami Whitcomb (33) and Natasha Howard as she tries to drive to the basket during the first half of Game 4 of a WNBA basketball semifinals playoff game, Sunday, Sept. 2, 2018, in Phoenix. (Ralph Freso/AP)

PHOENIX — Brittney Griner scored with 14.1 seconds to play then prevented Breanna Stewart from getting a shot off before the buzzer as the Phoenix Mercury rallied from a 17-point deficit to beat the Seattle Storm 86-84 on Sunday and force a deciding Game 5 of their WNBA semifinal series.

Griner had 29 points and 12 rebounds and DeWanna Bonner scored 21 of her 27 in the second half. Diana Taurasi had 16 points.

Game 5 will be Tuesday night in Seattle. Diana Taurasi, who had 16 points, is 13-0 in her WNBA playoff career in winner-take-all games.

The other semifinal series, between Atlanta and Washington, also has gone to a Game 5.

The Storm, who dropped both games in Phoenix after winning two at home, lost Sue Bird with a broken nose with 4:23 left in the third quarter when she took an accidental elbow to the face from teammate Breanna Stewart.

Griner's winning basket came after Bonner missed and Phoenix's Camille Little grabbed the rebound. Little got the ball to Griner, who scored. The Storm worked the ball to Stewart at the end but she couldn't get a shot off against the 6-foot-8 Griner's defense.

Griner's basket tied it at 76-76 and Bonner's two free throws put Phoenix up 78-76 with 5:29 to play, the Mercury's first lead since the game's opening moments.

Seattle had rolled to a 31-16 lead after one quarter, the Storm's highest-scoring quarter in their postseason history.

Mercury: Taurasi is 50-7 in elimination games including the WNBA, Olympics and NCAA competition.

The teams meet Tuesday night in the deciding Game 5.