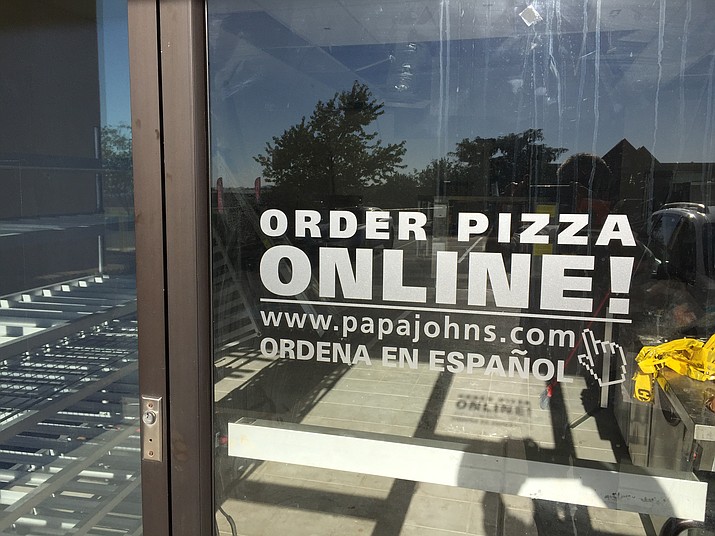 The former Prescott Valley Papa John’s store, near the old Kmart building, may not remain closed much longer. (George Lurie/Courier)

The vacant 110,000-square-foot, former Kmart property in Prescott Valley, empty since its closure three years ago, may be closer to changing hands and being redeveloped.

In November 2017, Kmart stopped paying rent to the trust that owns the building and now an out-of-state developer has the property in escrow, according to Prescott Valley Economic Development Coordinator Ben Hooper.

The Kmart parcel, including the large parking lot, is 10 acres and Hooper said the potential buyer is reportedly considering redeveloping the property with “multiple retail and/or non-retail uses.”

“It’s really an all-options-on-the-table kind of thing,” Hooper said. “This is really an excellent property. The challenge is finding its highest and best use.”

The former Prescott Valley Papa John’s store just across the parking lot from the old Kmart building, shuttered since late 2015, is showing signs of coming back to life.

Construction equipment and restaurant fixtures have recently been moved back into the store and former employees have been contacted recently about returning to work as early as September or October.

Brian Hope, who owned the PV pizza franchise and still owns and operates the Papa John’s in Prescott on Iron Springs Road, was traveling out of the country this past week, according to a manager at the Prescott Papa John’s, who was able to confirm plans are moving forward to reopen the popular pizza chain’s PV store.

The 135,000-square-foot building closed abruptly this past January as part of a nationwide restructuring by Walmart, which at one point was reported to be considering turning the cavernous building into a fulfillment center, but decided to put the property on the market instead.

The gas station — adjacent to the Chick-fil-A — was demolished in the past week. (George Lurie/Courier)

Walmart owns the warehouse building and large parking area that fronts it as well as the old gas station — adjacent to the Chick-fil-A — that was demolished in the past week.

CBRE is marketing the property, which according to several local sources, has recently attracted multiple offers. Jim Sakanich, a Chicago-based broker for CBRE, said late last week that he was not authorized by Walmart to comment on specific activity regarding the property’s potential sale and Walmart officials did not immediately respond to inquiries about the former Sam’s Club’s status.

“The proceeds from the store will go towards helping people who are going through cancer treatments,” Fitzgerald said. “We help pay for rent, utilities, gas to and from treatments.”

To help capitalize the start-up, Fitzgerald has created a GoFundMe with a goal of $3,000.

Located at 2535 N. Highway 89 on the north side of Chino Valley, Ft. Knox may not have any gold bars but the business is now carrying a full line of U-Haul trucks and other moving and storage equipment.

Owner Kathy Halsted said she is “proud” to be able to team with U-Haul to now offer customers a full range of DIY moving and self-storage options.