Number of children without vaccinations up slightly in state 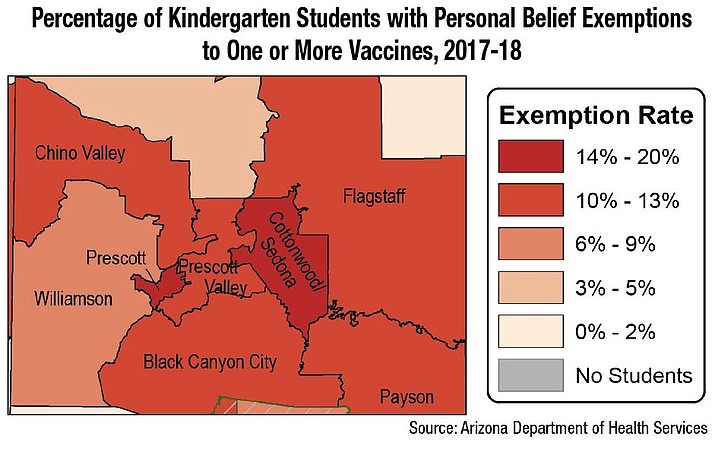 PHOENIX — Calling it a matter of public safety, Gov. Doug Ducey wants all youngsters in Arizona public schools to be vaccinated against various childhood diseases.

But the governor isn’t ready to mandate it — or take away the right of parents to opt out for personal reasons — at least not yet.

In an interview Wednesday with Capitol Media Services, Ducey said there has been a “slight uptick’’ in the number of kindergartners and sixth-graders who do not have the required inoculations. And in virtually all of those cases, the reason is personal: The parents simply don’t want their children vaccinated.

That is their right under current Arizona law. All it takes is parents signing a form.

But it also puts Arizona in the minority of states that allow opt-outs for personal reasons.

Ducey said as far as he is concerned, all children should be vaccinated against diseases ranging from mumps and rubella to chickenpox and measles. And he brushed aside claims by some that the vaccines have side effects, including a claimed link to autism.

“I’ve heard those rumors, and those rumors concern me,’’ he said. “But I think that the medical evidence and the subject matter experts would say that those rumors are unfounded.’’

That, however, still leaves the question of Arizona’s 5.4 percent noncompliance rate for personal reasons. And that’s on top of the 0.7 percent of children who have medical reasons they cannot get the shots.

Ducey said his first choice would be more public education.

And if that doesn’t work, should the personal opt-out be repealed?

“I think that’s something that’s worth reviewing,’’ he said.

The issue, Ducey said, is one of public safety.

“We want to have our kids inside of public schools be as safe as possible and avoid whatever diseases these vaccinations prevent,’’ the governor said.

The uptick in noncompliance, he said, is concerning.

Ducey calls it slight, going from 4.7 percent of children entering kindergarten to 5.4 percent.

But in real numbers, a 5.4 percent rate of personal noncompliance means close to 60,000 children in public schools without the required immunizations, an increase in one year of 7,700.

What concerns the medical community is the need to create “herd immunity.’’

There always will be some children who cannot get vaccinated against certain diseases, whether for health or religious reasons. But if pretty much everyone else is vaccinated, the chances of a disease spreading through a school from one infected child to others is much reduced.

Ducey said his first step is education -- and perhaps a bit of pressure.

“I want to take advantage of the governor’s bully pulpit to make people aware of vaccinations,’’ he said.

Still, Ducey conceded that may not be enough.

“I think it may be time to reconvene and talk about how we can reform and improve law or policy,’’ he said. But even then, the governor said all that should be focused on educating parents to gain voluntary compliance.

He declined to be critical of the parents who refuse to immunize their children.

“We have to believe that they’re acting in what they believe are the best interests or best intentions of their children,’’ Ducey said. “I want to make sure they have the facts.’’

The governor acknowledged that, in some ways, his views are colored by the fact that his parents vaccinated him and that it never occurred to him not to do the same for his three boys.

“I have not talked with a parent who has chosen to opt out of this and heard their reasons,’’ he said.

One starting point, he said, would be to look at what other states have done.

“Are there states that do it better?’’ Ducey asked.

Around the region, only Colorado and Utah allow for personal exemptions according to the National Vaccine Information Center. In fact, according to that report, California even eliminated the religious exemption.

The Centers for Disease Control reports that for the MMR vaccine -- measles, mumps, rubella -- that 94 percent of Arizona kindergartners were immunized. That compares with 97.3 percent in California, 95.5 percent in New Mexico and 90.9 percent in Nevada.

In the other states in the area that allow personal exemptions, the rate was 93.8 percent in Utah and 87.3 percent in Colorado.

The aim of such a study, the governor said, would be to see if there is a “model law or reform that we could apply.’’

One thing state health officials here have found is an almost direct relationship between affluence and opting out of immunization.

In the Tucson area, for example, the rate of personal exemptions is below 2 percent in the areas in and around the center city. By contrast, it tops 6 percent in the Catalina Foothills, Oro Valley and Tanque Verde.

A similar pattern plays out in the Phoenix area, with the highest rates of exemptions — above 14 percent — in the Fountain Hills and Rio Verde area.

In the rest of the state, the highest rates of those opting out are in Prescott, the Cottonwood-Sedona area, and Page.