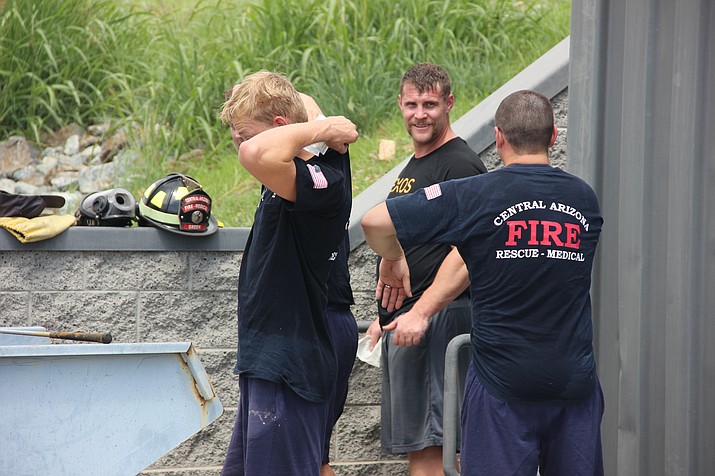 Local firefighters wipe sweat and smoke residue from their necks, armpits and groins after a training exercise in September that involved them being exposed to smoke. (Max Efrein/Courier)

Having a soot-covered helmet was once a badge of honor for firefighters.

“In the old days, it was cool if you coughed up smoke for three days,” said Don Devendorf, Fire Marshall for the Prescott Fire Department.

Editor's note: This is the first installment of a short series about firefighter cancer risks. The next story will talk about Arizona’s relatively new cancer presumption law and how some local firefighters have found it difficult to receive worker’s compensation for their cancer diagnoses. Watch The Daily Courier and dCourier.com.

Better equipment and more stringent safety protocols were gradually introduced to help protect firefighters from heat and respiratory distress, but concerns about chemical exposure and how that relates to various forms of cancer and other terminal illnesses didn’t truly start ramping up until about a decade ago.

“Most of the work that’s been done on firefighter health research to understand risks has been done in the last 10 years, because FEMA started funding research specific to the fire service,” said Sara Jahnke, Director of the Center for Fire, Rescue and EMS Health Research.

In general, firefighters have about a 9 percent higher risk of being diagnosed with cancer and a 14 percent higher risk of dying from cancer than the general U.S. population, according to a 2010 study done by the National Institute for Occupational Safety and Health. The cancers mostly responsible for this higher risk are respiratory (lung, mesothelioma), digestive system (oral cavity, esophageal, large intestine) and kidney.

It was around the time of such studies that agencies like the Prescott Fire Department and Central Yavapai Fire District (now a part of the Central Arizona Fire and Medical Authority (CAFMA)) began to make some significant changes to their standard operating guidelines.

They started requiring their personnel to wear self-contained breathing apparatuses (SCBAs) during overhaul, or the period of time it takes to ensure that a smoldering fire is completely put out.

Then they found out their clothing was a problem.

Local firefighters immediately strip and bag their protective turn-out gear so it can be professionally washed after a training exercise that exposed them to smoke in September. This is now a standard procedure in the area after any smoke exposure. (Max Efrein/Courier)

“We were getting a little smarter about protecting our respiratory track, but things were also being absorbed by our clothing,” Devendorf said.

So about five years ago, local agencies made sure to have two sets of turnouts for each firefighter so they could have a fresh pair to change into when they returned to their stations from a fire.

Soon after, they decided it was best for personnel to strip their turnouts and helmet hoods at the scene and bag them up so they aren’t carried with the firefighters in the cab of the vehicle, where it would continue to off-gas.

Local firefighters are also now encouraged to wipe sweat and smoke residue from their necks, armpits and groins after every exposure with disposable wipes that are specially-designed to absorb some of the toxins emitted from burning materials.

HALF-MASKS BEING LOOKED AT

Some fire departments in states like California have even begun having their personnel wear half-masks in the “warm zone,” or the about 100 feet outside the source of a fire where there’s still known carcinogens in the air. These type of respirators are typically used by painters or people who spray pesticides.

While this is a pretty novel concept, local fire investigators began using half masks about five years ago when rummaging through the remains of a structure fire.

“After the fires out, that’s when most of the toxic gasses are around, so you’ll have a lot of off-gassing going on and a lot of particles in the air,” said CAFMA Fire Marshall Rick Chase, who leads most of the agency’s fire investigations. “Some fire investigations are in depth and very time consuming, and it’s just not good digging through these scenes without proper protection.”

Whether or not half-masks might be something other local fire personnel begin using for other situations outside of fire investigations has yet to be a serious discussion.

“We’ve talked about it, but the cost of the half-mask and the cartridges is a consideration,” said CAFMa Training Chief John Feddema, who is in charge of CAFMA’s safety committee.

Instead, if a firefighter is in the warm zone and wishes to put on a full SCBA, he or she is welcome to do that.

“They should put on an air pack if they’re in the smoke, and that’s something we tell them,” Feddema said.

Now that such health matters are on everyone’s radar and major steps have already been taken, Devendorf said their approach is going to improve as technology and funding permits.

“In order to do our job, we’re always walking the edge between what our job requires and what amount of safety is available to us,” he said. “As safety equipment becomes more affordable, as it becomes lighter, as it becomes more usable, there’s no doubt that our industry will deploy as much of it as we possibly can.”