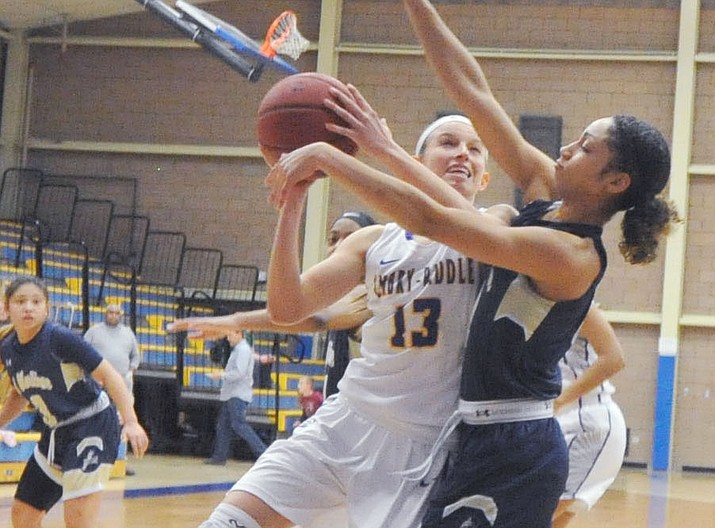 Embry-Riddle guard Melissa Pfeifer takes it hard to the basket during a game last season against Cal-Maritime on Feb. 1, 2018, in Prescott. Pfeifer returns for the 2018-19 Eagles season. (Les Stukenberg/Courier, file)

By Jake Whitaker, For the Courier |

Last year the Eagles went 21-6 (11-3 Cal Pac Conference) in the team’s second season, and with 10 players returning from last year, including four All-Conference players and Freshman of the Year Bethany Wolph and first-team All-Conference guard Danae Ruiz, the team looks to be just as strong.

“They had a lot of success, and we’re trying to take what they’ve established and build on it,” Trujillo said. “The girls are talking about competing for a championship, and I think that’s possible. They were so close last year and they did it all as sophomores. Now they have that maturity and the success of the past two year, I think [a championship] is an achievable goal.”

The transition in leadership may often be a point of conflict for teams, but there is nothing but support from the players for their new coach.

When asked about the new coach, junior Katan Martina emphasized the trust that’s already developed between the coach and the players.

“Coach [Trujillo] likes to let us play, he likes to only call plays when we really need them or there’s a good opportunity. He lets us do our own thing because he trusts us and we really like that style of play,” Martina said. “He lets us have the ball in our hand because he knows we’re good player and smart players.”

Junior Melissa Pfeifer added, “There’s definitely differences in styles, every coach does things differently, but I definitely feel that [Embry-Riddle] got the right guy for the job. He’s doing great and we’re all really glad that he’s here.”

The Eagles have two new players on the roster for this year, guard Savannah Madden and forward/center swing player Kamryn Brown. With a team so upperclassmen-heavy, they’ll play limited minutes, but both Madden and Brown will be looking to make the most of their minutes. With Brown standing at 6-foot-2, she may be called in to add some vertical presence to the court.

Embry-Riddle finished second in the Cal Pac standings last year, and with a more experienced squad, a conference championship isn’t a far reach.

The Eagles play their first game of the 2018-19 season at home against Saint Katherine on Sunday, Oct. 28. Tipoff is set for noon in Prescott.

Jake Whitaker is a stringer for The Daily Courier. Email him at sportsdesk@prescottaz.com.