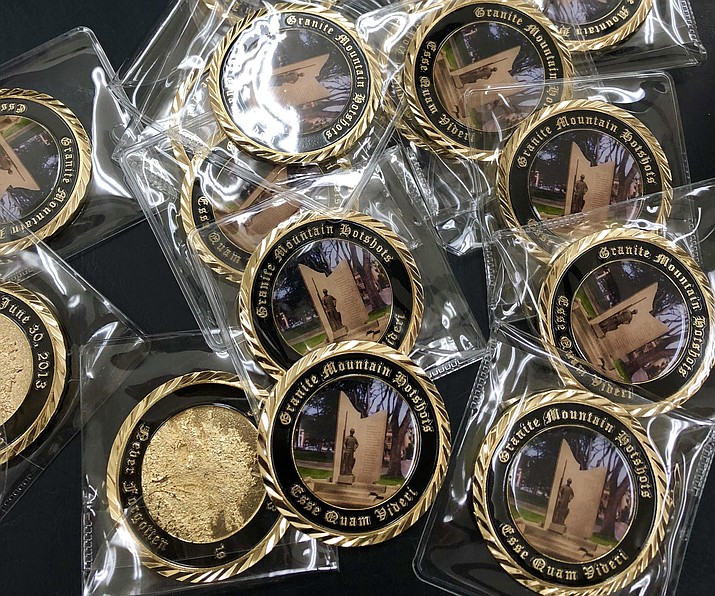 Five hundred of the limited edition “Challenge Coins” are now available to those who contribute $200 or more to the fundraiser for the courthouse plaza Hotshot memorial. Organizers say more coins will be ordered, as needed, up to 2,000 total. (Cindy Barks/Courier) 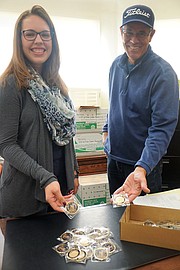 The challenge to raise a half-million dollars for a Granite Mountain Hotshot Memorial on the courthouse plaza has now moved to the public.

With contributions already pledged from all of the local governments, organizers of the Granite Mountain Hotshot Memorial Partnership say the fundraising effort is nearly halfway to its goal.

Prescott City Councilwoman Alexa Scholl, a member of the partnership, reported this week that the effort has now raised about $210,000 toward the memorial cost.

It also includes an in-kind contribution from Yavapai County for engineering assistance, as well as the memorial site on the southeast side of the Yavapai County Courthouse Plaza.

Now, say Scholl and Partnership Chairman Bruce Martinez, the organization is hoping that the recently arrived Limited Edition Granite Mountain Hotshots Challenge Coins will serve to get the public involved as well.

The coins, which have a rendering of the planned memorial on one side, and the alligator juniper tree that the Hotshots saved from the June 2013 Doce Fire on the other, are available for those who contribute $200 or more to the memorial fundraiser.

Five hundred of the coins are currently available, and Scholl said the partnership plans to order more, up to a total of 2,000. At $200 each, the coins could bring in as much as $400,000.

In addition, Scholl said the names of those who contribute at least $100 are being listed on the partnership’s website.

Currently, the partnership is using social media to let the public know about the challenge coins. Martinez said the 10-member volunteer partnership plans to meet before the end of the year to discuss other marketing ideas.

The partnership announced its choice in late June 2018 – prior to the five-year mark of the Hotshot tragedy.

The design involves a larger-than-life statue of a lone Hotshot back by a stylized granite-slab image of Granite Mountain. Prominently carved into the back of the granite slabs will be an image of the Prescott National Forest alligator juniper tree that has come to symbolize the Hotshots.

Partnership members hope the sculpture will be in place at its designated spot on the Cortez Street side of the courthouse plaza by June 30, 2019.

For those interested in contributing to the effort, information is available online at: https://www.gmhsmemorial.com.

In addition, contributions can be made by mailing a check, made out to the Memorial Partnership, to: P.O. Box 4299, Prescott, AZ 86301. Contributions can also be made directly on Facebook, at: https://www.facebook.com/gmhsmemorial/.