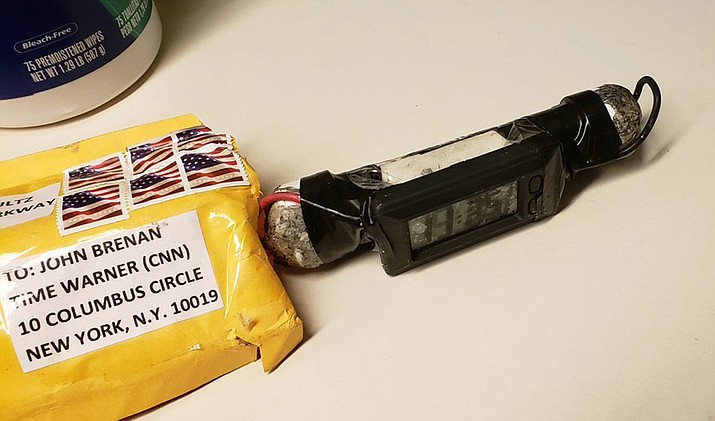 This image obtained Wednesday, Oct. 24, 2018, and provided by ABC News shows a package addressed to former CIA head John Brennan and an explosive device that was sent to CNN's New York office. (ABC News via AP)

WASHINGTON — In the hours before his arrest, as federal authorities zeroed in and secretly accumulated evidence, Cesar Sayoc was in his element: spinning classic and Top 40 hits in a nightclub where he'd found work as a DJ in the last two months.

As he entertained patrons from a dimly lit booth overlooking a stage of dancers at the Ultra Gentlemen's Club, where Halloween decorations hung in anticipation of a costume party, he could not have known that investigators that very evening were capitalizing on his own mistakes to build a case against him.

He almost certainly had no idea that lab technicians had linked DNA on two pipe bomb packages he was accused of sending prominent Democrats to a sample of on file with Florida state authorities. Or that a fingerprint match had turned up on a separate mailing the authorities say he sent.

And he was probably unaware that investigators scouring his social media accounts had found the same spelling mistakes on his online posts — "Hilary" Clinton, Deborah Wasserman "Shultz" — as on the mailings he'd soon be charged with sending.

In the end, prosecutors who charged Sayoc with five federal crimes Friday say the fervent President Donald Trump supporter unwittingly left behind a wealth of clues, affording them a critical break in a coast-to-coast investigation into pipe bomb mailings that spread fear of election-season violence.

The bubble-wrapped manila envelopes, addressed to Democrats such as Barack Obama and Hillary Clinton and intercepted from Delaware to California, held vital forensic evidence that investigators say they leveraged to arrest Sayoc four days after the investigation started.

"Criminals make mistakes so the more opportunities that law enforcement has to detect them, the greater chance they're going to be able to act on that, and that appears to be what happened here," said former Justice Department Aloke Chakravarty, who prosecuted the Boston Marathon bombing case.

It wasn't always clear that such a break would come, at least not on Monday when the first package arrived: a pipe bomb delivered via mail to an estate in Bedford, New York, belonging to billionaire liberal activist George Soros.

That same day, Sayoc, still under the radar of law enforcement, retweeted a post saying, "The world is waking up to the horrors of George Soros."

Additional packages followed, delivered the next day for Clinton and Obama and after that to the cable network CNN, former Attorney General Eric Holder, former Vice President Joe Biden — and other Democratic targets of conservative ire.

Each additional delivery created more unease. But together they also provided more leads for the FBI, which mined each pipe bomb for clues at a specialized laboratory in Quantico, Virginia.

As the packages rolled in, technicians hit a breakthrough: a fingerprint and DNA left on a package sent to Rep. Maxine Waters, a California Democrat and one of the intended pipe bomb recipients, and DNA on a piece of pipe bomb intended for Obama.

In addition, his social media posts that traffic in online conspiracy theories, parody accounts and name-calling include some of the same misspellings as were noticed on the 13 packages he was charged with sending.

The clues, authorities say, led them to a 56-year-old man with a long criminal history who'd previously filed for bankruptcy and appeared to be living in his van, showering on the beach or at a local fitness center.

As the FBI worked around the clock, and as Americans debated the hard-edged political climate and whether Trump fanned the flames with his rhetoric, Sayoc periodically used Twitter to vilify Soros. That was not uncommon for Sayoc, an amateur body builder and former stripper whose social media accounts are peppered with memes supporting Trump and posts denigrating Democrats.

On Thursday from noon to 9 p.m. as law enforcement grew ever closer, descending on a postal sorting facility in Opa-locka, Florida, Sayoc was working at a disc jockey at a West Palm Beach nightclub where he'd earlier been a floor bouncer.

Sayoc spun his music from inside a small dimly lit booth overlooking a stage with performers dancing below. Autographed photos of scantily clad and nude adult entertainers were plastered across the walls like wallpaper

"I didn't know this guy was mad crazy like this," said Stacy Saccal, the club's manager. "Never once did he speak politics. This is a bar. We don't talk politics or religion in a bar, you know?"

But Scott Meigs, another DJ at the club, had a different experience.

He said Sayoc had been talking about politics to everybody at the club for the last two weeks, preaching the need to elect Republicans during the November elections. "I just figured he was passionate about the upcoming elections."

The next morning, he was taken into custody near an auto parts store in Plantation, Florida, north of Miami. Across the street, Thomas Fiori, a former federal law enforcement officer, said he saw about 50 armed officers swarm a man standing outside a white van with windows plastered with stickers supporting Trump and criticizing media outlets including CNN.

They ordered him to the ground, Fiori said, and he did not resist.