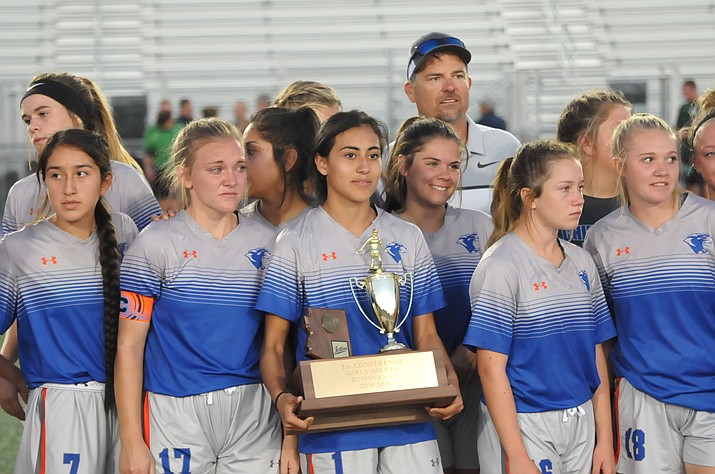 The Chino Valley girls soccer team stands for a photo while holding the 2A state runner-up trophy after a tough 3-1 loss to Northland Preparatory Academy in the 2A state finals Saturday, Oct. 27, 2018, in Gilbert. (Doug Cook/Courier)

GILBERT — If you think about it, going 1 for 3 in state championship matches over the past three seasons isn’t half bad.

The Chino Valley girls soccer team won the program’s first-ever state title in 2016 – on its first try. And although 2017 and, now, 2018 didn’t turn out as the Cougars’ players had hoped, there’s certainly no shame in being a state runner-up.

“It’s just awesome that all of our hard work paid off,” Karren said. “We’ve been working so hard this season, just as much as last season.”

Chino Valley’s lone goal came with 10.5 seconds left in the first half on a gorgeous 20-yard shot from up top by Taylor Elsea, a freshman who didn’t start Saturday’s match.

The equalizer seemed to have provided the spark the Cougars craved heading into halftime. Instead, Northland Prep snared the momentum less than 4 minutes into the second half when Karren scored on a rebound in front of Chino Valley’s net. Up 2-1, the Spartans snuffed out the Cougars’ potent attack by frustrating the latter’s forwards in the passing lanes.

“They really just did try harder than us,” said Cougars senior midfielder Lauren Foster, fighting back tears. “They put forth a good effort, and they showed up and we didn’t. But I’m honored to play on this team, and I’m honored to play for my dad [coach Allen Foster].”

Chino Valley had its chances in the title match, albeit limited, and Northland Prep did an effective job of bleeding the clock. With 1:07 remaining in regulation, Spartans senior midfielder Emma Blair fed Hovis in front of the Cougars’ net for the score that put the match out of reach at 3-1.

Both Chino Valley and Northland Prep. are members of the 2A Central region. The Cougars won the region, clinching the title by beating the Spartans, 1-0, on Sept. 27 in Flagstaff.

Northland Prep seemed determined to gain a measure of revenge.

“We didn’t have as many opportunities as we should’ve had up front,” Cougars junior midfielder Ashley McGuffey said. “Maybe there was such a sense of urgency in our offense that it caused mistouches in front of the goal. But we got outplayed.

“This is one of the best brands of soccer that we’ve ever played. They [Spartans] changed up their formation against us, and it worked. My team is my family, 100 percent, every girl out there. We kept each other up the entire game, and that’s important.”