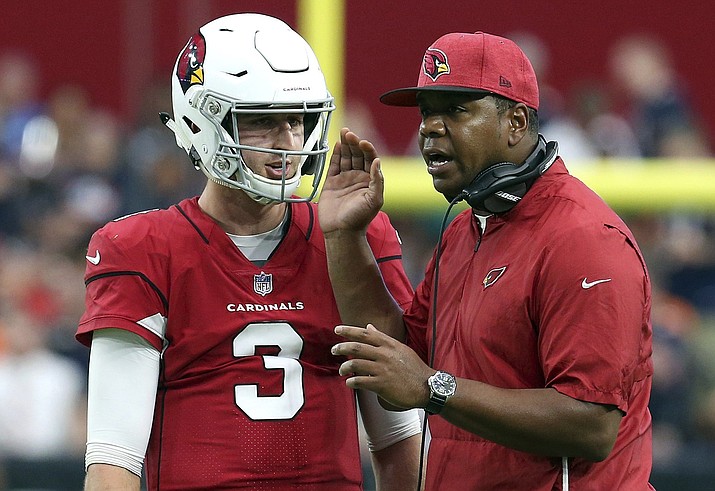 Arizona Cardinals rookie quarterback Josh Rosen talks with then-quarterbacks coach Byron Leftwich during the second half of the team's game against the Chicago Bears Sunday, Sept. 23, 2018, in Glendale, Ariz. Leftwich, who has been promoted to offensive coordinator, is the fifth coordinator that Rosen has had in the past five seasons. (Ralph Freso/AP file)

TEMPE — A disciple of Bruce Arians is now in charge of the Arizona Cardinals offense.

Whether Byron Leftwich can awaken that slumbering unit remains to be seen.

But Arians' influence is undeniable.

After a lot of lobbying, Arians talked Leftwich into taking a job as a coaching intern two seasons ago. Last year, he promoted Leftwich to quarterbacks coach.

When Arians retired as Cardinals head coach after last season and Steve Wilks was hired, Leftwich stayed on as quarterbacks coach. And when Wilks fired Mike McCoy last week, Leftwich was promoted to offensive coordinator.

"B.A., he's the reason I'm here," Leftwich said Thursday in his first meeting with reporters since getting the new job. "It was just special that he gave me this opportunity. He's been trying to get me to do it forever and he gave me the opportunity and once I saw it I fell in love with it.

"He knew the way I cared about football. He knew how much time and energy I put into this thing. I'm glad he got me into this thing because I love every minute of it right now."

"Byron is sort of a B.A. descendent, and he (Arians) is sort of a ghostly legend in this building here," Rosen said. "I think he's putting in some new stuff but also pulling on some past knowledge. I am looking forward to what we are about to do with him."

Leftwich, like Rosen, was a first-round draft pick at quarterback, chosen seventh overall out of Marshall by Jacksonville in 2003. He played 10 seasons in the NFL, the last three with Pittsburgh. Arians was the Steelers' offensive coordinator for two of those seasons, and they developed a bond that continues to this day.

When he finally convinced Leftwich to take a coaching job, Arians let him call plays last year for a pair of preseason games.

"He was outstanding," Arians said in an interview on Arizona Sports 98.7 FM. "He was always a play ahead. You could tell he was a quarterback and a really, really smart one. He had such a great rapport in that room. I know Carson Palmer leaned on him heavily."

Leftwich inherits an offense that ranks last in the NFL in total yards and yards rushing and next-to-last in yards passing. Just what alterations he can make for Sunday's game against San Francisco is uncertain.

"It's tough to change a lot in a week but there is things that we can do," Leftwich said. "It's not really about doing a bunch of different stuff. It's about getting these guys. It's about Josh, it's about the growth of Josh but it's about the other 10 guys also. We've just got to play better and we've got to practice better."

His main focus is the development of Rosen.

"I mean he's a young quarterback. This kid's 21 years old. This is the National Football League," Leftwich said. "I've been there. I know what he's going through. I know what he's thinking. We're just trying to get him there, get him there as quickly as possible, getting him there as safe as possible and just teach him the things that he's going to need to play consistently for a long time in this league."

Leftwich said his playing career mirrored that of Rosen in the early years.

"I really like this kid," he said. "I think this kid can really play football."

Leftwich is Rosen's fifth offensive coordinator in the past four years.

"It's not fun. If I could prefer it, I would have one offense, but that's not really how it all worked out," Rosen said. "So, I'm just going to do the best I can with what I've got."

But Leftwich said he's not throwing a lot of new material at Rosen.

Arians, in his radio interview, had one prediction for the Leftwich offense.

"One thing I'll bet," Arians said. "It's a very teachable game plan and the guys will know exactly what's expected of them."