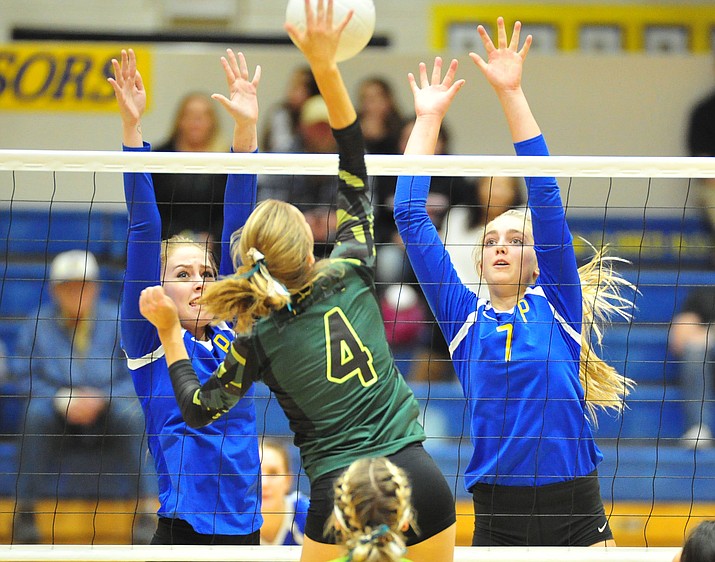 Prescott's Helen Burger and Kathrine Radavich go for a block against Flagstaff on Oct. 18, 2018, in Prescott. The No. 21-ranked Badgers upset No. 12 Catalina Foothills 3-2 in the 4A state play-in round Thursday, Oct. 25, in Tucson. The win puts Prescott in the state playoffs for the sixth straight year. (Les Stukenberg/Courier, file)

TUCSON — The Prescott volleyball team pulled the upset card in Thursday night’s 4A state play-in round with a surprising 3-2 victory over No. 12-ranked Catalina Foothills, sending the Badgers to the state playoffs for the sixth straight season.

“We are very excited about this morale boost,” Prescott head coach Josiah Ramirez said via text message while the team traveled back from Tucson. “It took our entire team to get our victory this evening, along with intelligent volleyball decision making.”

Ramirez added he was “proud of the girls.”

Prescott made the state playoffs last season as a No. 14 seed before losing to No. 3-ranked Salpointe Catholic 3-0 in the first round. The Badgers haven’t missed the state tournament since 2012.

Catalina Foothills (12-14, 6-4 Kino) season comes to a close having lost four of their last six matches despite the high ranking.

The Arizona Interscholastic Association is expected to release the 4A state playoff bracket Saturday, Oct. 27.