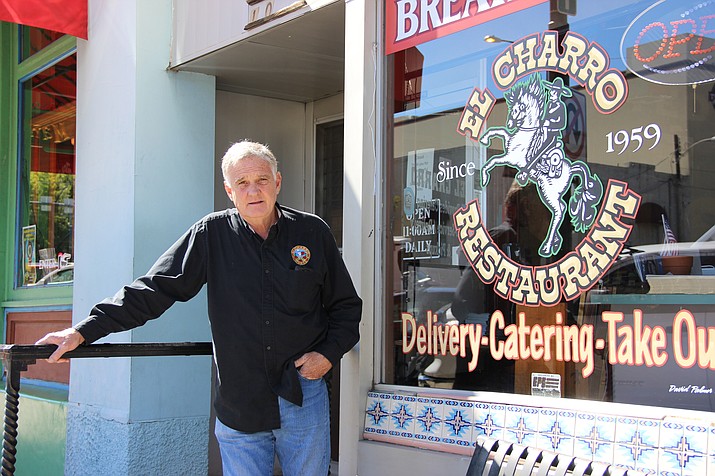 Brisk as it was outside for a mid-October day in Prescott, El Charro Mexican Restaurant & Cantina felt warm; comfortable; timeless.

Yet it was noon on a Monday and no chips were being crunched; no margaritas were being sipped; no servers were taking orders.

“We’re closed,” the owner, Gary Denny, told a man and woman trying to enter through the front door.

“Closed!? Till when?” the woman asked.

Baffled, the couple commented on how unfortunate the news was and began meandering downtown Prescott in search of somewhere else to dine.

Denny could barely speak, his voice worn after what was perhaps El Charro’s busiest weekend in its 59 years of continuous operation at 120 N. Montezuma St.

One week ago, on Thursday, Oct. 11, he broke the news about having to close the res taurant via a Facebook post. The single post has since received 417 comments and been shared 781 times.

“My first Mexican food ever was here in ’62, sad to see it go,” one person commented.

“Another memory lost,” a third wrote.

Hundreds feeling similarly made sure to visit the restaurant before it officially shuttered Sunday afternoon, Oct. 14.

“The weekend was awesome,” Denny said. “Even in the rain, we were on a waiting list Friday, Saturday and Sunday.”

There was nothing sweet about the closure, however. Denny, 58, has owned it for nearly 19 years, having purchased it from his aunt and uncle in 2000.

But change got the better of him and the business. Rent for the prime downtown space has sky-rocketed over the years, the number of Mexican restaurants in the Prescott area has quadrupled since the restaurant’s early days, and maintaining a full crew of reliable employees to offer quality service has proven difficult in recent years.

“I’ve been losing $350 a day for the last few months,” Denny said. “My accountant and attorney told me to close after Labor Day, but I just felt an obligation to try to turn it around. I didn’t want to be the person to close the oldest Mexican restaurant in Northern Arizona. You can’t spin all the plates at once though.”

Denny is currently working with the owner of the building and talking with some prospective buyers to figure out what to do with the business.

“I would be happy if someone could come in here and take over Prescott El Charro,” he said.

In the meantime, anyone craving El Charro’s food can find the same recipes at El Charro Norte in Chino Valley, which Denny opened nearly three years ago.

“It’s bigger than this; we have a lot of parking out there; you can even bring your horse and hitch it outside,” he said.

Since he doesn’t have to split his attention between the two restaurants any longer, he is now serving lunch at the Chino location. Two Prescott El Charro staples have also relocated to the newer restaurant: Phil Flores and Barbara Conrad. Flores worked as a cook for Prescott El Charro for 47 years, and Conrad waited tables at the restaurant for about 30 years.

Nonetheless, Denny, who was born and raised in town as a fourth generation Prescottonian, would be lying if he said he wasn’t going to miss the original location.

“Every day when I walked in, it was like going to Thanksgiving dinner at my family’s house,” he said. “There were very few moments that I didn’t know somebody in the room that I had known probably my whole life.”