VA work - $30M and counting - in progress as facilities upgraded, renovated and expanded
Effort is to meet health needs of veterans 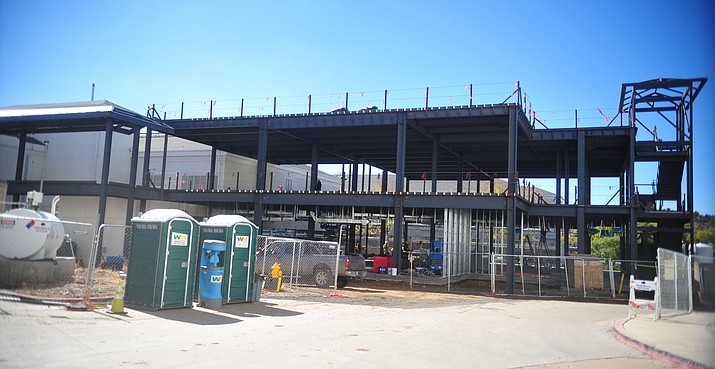 The local VA campus on Highway 89 is a historic icon — its service to area veterans dates back to 1930.

As one might expect, age brings its share of wrinkles and the need to replace worn out parts.

No one knows the growing pains of this 164-acre campus better than Terry Boyd, the agency’s facilities chief.

“There have been a lot of challenges to overcome,” Boyd admits about the $30 million worth of current construction that is likely to double over the course of next year or so.

The biggest inconvenience at the bustling medical center with its around-the-clock emergency care, inpatient rehabilitation and long-term care facilities is the loss of 45 hospital parking spaces.

Add to that the normal disruptions that come with the installation of utilities, unexpected weather conditions, and a temporary construction delay upon the discovery of some ancient bones.

Prior to the VA taking over a portion of the property, the land was home to Fort Whipple, a base for the United States Calvary during the Indian Wars of 1864 to 1882.

A renowned anthropologist was hired to inspect the bones but the origin was unable to be determined. There was no indication that they were from an Indian burial ground, officials said.

The upside of all the hubbub, and headaches, is that within the next few months some of the bigger projects will be completed even as new projects get underway, Boyd said.

All of this “rejuvenates the campus so it remains viable for the future,” Boyd said.

This VA services 29,000 veterans over a 65,000-square-mile area with smaller clinic facilities throughout northern Arizona.

The new 18,000 square foot pharmacy and lab building which is due to open in March of 2019 at the Prescott VA Hospital. (Les Stukenberg/Courier)

The most prominent construction project is the new, 18,000-square-foot laboratory and pharmacy building that will include a new main entrance into the Bob Stump Medical Center. That $10 million project — the final cost is $5 under the budgeted amount — is expected to be finished in January, Boyd said. The official opening for patients is anticipated for March, he said.

“This becomes the whole hub of our patient care,” Boyd said.

Behind the medical center is another $10 million project nearing completion: the campus’ 18,400-square-foot Sterile Processing Service, a two-story complex that enables the VA to meet federal environmental regulations, store supplies and add services to the VA’s long-term care facility for veterans.

The VA also completed last year a $1.4 million interior clinic expansion for patients with spinal cord injuries and a $1.5 million facelift to the exterior of the French Colonial-style main hospital that was built in 1937.

Still in the design phase is a $5.4 million, 10,100-square-foot expansion of the VA’s warehouse facilities at the rear of the campus. Boyd said that project launched last year and is expected to get underway by the summer.

In recent months, Boyd was kept busy overseeing the completion of a $3.5 million lighting and electric upgrade.

The project included the installation of 330 energy-efficient LED lights around the interior perimeter of the campus, a project that will directly connected to patient and staff safety, she said.

Some of the older building (25 total) will receive exterior upgrades and new paint at the Prescott VA Hospital. (Les Stukenberg/Courier)

In the coming weeks, Boyd said a new $6 million project will begin: the restoration of 25 historic structures; 15 are medical or VA staff buildings and the remainder are former staff houses. Six of those former quarters are slated for interior renovations, too.

In addition to that work, there is another $1.8 million slated for façade renovations on the horizon, as well as $4 million worth of road and sidewalk improvements and $4 million to replace 875 single-pane windows in 15 of the campus buildings. Those will all be replaced so as to maintain the historic character yet provide needed insulation, Boyd said.

“We are fortunate that we have gotten a lot of good support to take care of problems, and improve our capabilities with new facilities,” Boyd said of Congress and the federal VA administration’s multi-million approval of more enhancements.

Two major projects for next year include a $9 million renovation of the 120-bed Domiciliary and about a $10 million renovation and expansion of the existing radiology department. In addition, some $27 million has been allocated to do a redesign of the VA’s long-term care nursing unit known as the Community Living Center.

The CLC proved a focus of attention in June after it received the lowest VA ranking for facilities. Within three months, the rating improved one level. Structural issues, though, persist. Renovations are called for to enhance the facility so it can answer the needs of the region’s aging veteran population, top VA officials said.

“NAVAHCS is here to stay and our construction projects are designed to move us into the future,” said Associate Director Lisa Martin. “We love our campus and we will preserve its historical foundation while upgrading and improving the buildings to provide better care for veterans.” 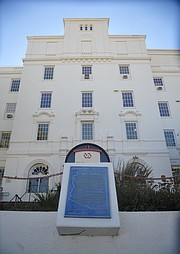 Lots of renovations and new construction are being made at the Prescott VA Hospital. (Les Stukenberg/Courier)

As one of 54 VA hospitals when the Veterans Administration was created in 1930, a rich history of change and growth occurred and continues as health care services advance.

During the 1930s, most of the buildings constructed during and after World War I were torn down.

Several buildings still remain today — 11 of them were officers’ quarters erected between 1903 and 1908. Built similar in façade with simple Victorian details, the buildings retain their beautifully preserved historical and architectural integrity. Among the still-standing oldest health care and VA administration buildings are the former railroad depot built in 1903 and others erected into the 1920s.

The Main Hospital building (Building 107) was constructed in 1937. A stately five-story building with long angled wings was built in a French Colonial architectural style. Roofs at the time were red tiles. The Dining Hall (Building 108) constructed behind the main hospital was completed in 1939.

During the 1940s, several sweeping changes were made regarding health care services. Domiciliary services were provided for veterans who required care for their disabilities, but not to the extent of hospital bed care.

In the mid 1950s, the Prescott Veterans Hospital had a hospital section of 382 beds and a domiciliary section of 155 beds. Treatment of tuberculosis was the primary focus of the hospital. By the late 1960s the remaining tuberculosis beds were converted to general medical and surgery beds.

In 1974, the completion of Building 117 (connected to the south wing of the main hospital) allowed the expansion of ambulatory/primary care services.

Construction of several building in the 1980s significantly changed the landscape and layout of the hospital complex. The Chapel (Building 152), Greenhouse (Building 153) and Library (Building 154) were built. The nursing home care unit, now called the “Community Living Center (CLC)” was constructed in two phases and began in the late 1980s and was completed in 1990 for both short and long-term rehabilitation care. The current 120-bed Domicilary that is committed to offering veterans substance abuse treatment, rehabilitation, and return to community living for veterans using interdisciplinary and multi-agency approaches was finished in 1991.