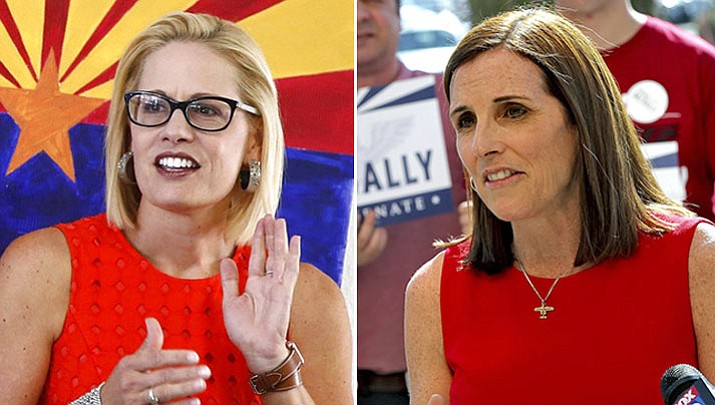 The race to pick a new U.S. Senator from Arizona underscores the tenor, tactics and tightness of the 2018 midterm elections.

Two admired congresswomen are neck and neck as they seek to replace retiring Sen. Jeff Flake. Martha McSally, the Republican, and Kyrsten Sinema, the Democrat, are engaged in a high-stakes, high-spending campaign that reflects the nation’s sharp political divide.

Many issues that dominate debate nationally seem intensified here under the hot Arizona sun. Immigration remains a vexing problem in a state that shares a border with Mexico and has a growing Latino population. Health care is uppermost in the minds of those in Arizona’s large retirement community. The economy, booming here as it is nationally, has still left many Arizonans with low-paying jobs that have not kept pace with the cost of living.

The candidates appear to have come from Central Casting. McSally, the first female U.S. fighter pilot to have flown in combat, votes with President Trump 97 percent of the time, according to the website FiveThirtyEight. Sinema, a former Green Party activist, has moderated her views since arriving in Congress and has voted with Trump 62 percent of the time.

Sinema stresses her independence, a useful trait in a state that has not elected many Democrats but does favor mavericks such as John McCain, who cast a critical vote to save the Affordable Care Act, and Flake, who argued against his party to have the FBI conduct an additional investigation of Supreme Court nominee Brett Kavanaugh.

McSally, on the other hand, is straight-line conservative. She told the Arizona Republic newspaper that her philosophy centers on “a strong defense, a limited federal government, that government shouldn’t be solving every problem for you.”

Together, the two candidates are spending nearly $30 million on the campaign, with Sinema holding a slight edge in fundraising. But McSally is playing tough, in the Trump mold, as local columnist E.J. Montini noted the other day:

“The entire strategy of the McSally campaign has been to portray Sinema as a wild-eyed anarchist who, in the latest and most ridiculous campaign mailing would somehow facilitate the obliteration of Phoenix by way of a nuclear bomb.”

Underscoring the importance of the race as Democrats try to flip control of the Senate are visits by Presidents George W. Bush and Donald Trump to campaign for McSally. Yet, Sinema clings to a tiny lead in polling.

Not surprisingly, the number of people newly registered to vote in Arizona this year is more than double that of the last midterm election. And the youngest voting demographic, those aged 18 to 24, has more new voters registered than all other age groups since Jan. 1.

McSally and Sinema have had only one televised debate and it, too, mirrored national themes. In her closing remarks, seemingly out of nowhere, McSally stated she was “sexually abused by a coach as a teenager.” Sad as that may be, it’s hard to see how it constitutes a qualification for national office — except in the currency of the moment.

Arizona has a broiling Senate race in which women are in the forefront, where young voters and Latino voters could hold the keys, and where Trump and his agenda are being tested.

“There’s a lot of fights out there,” said McSally, in an ode to the obvious, “and there’s a lot at stake.”

Peter Funt is a writer and speaker. His book, “Cautiously Optimistic,” is available at Amazon.com and CandidCamera.com.