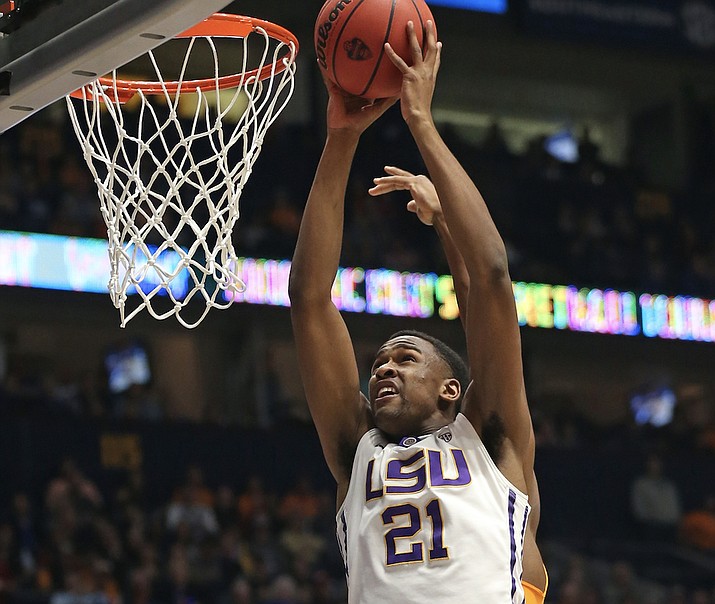 Aaron Epps (21) goes to the basket against Tennessee on March 11, 2016, in Nashville, Tenn. Epps, a former LSU standout, was selected with the No. 6 overall pick of the NBA G League Draft by the Northern Arizona Suns on Saturday, Oct. 20, 2018. (John Bazemore/AP, file)

PHOENIX — With their first pick in the 2018 NBA G League Draft, the Northern Arizona Suns went with a big man inside, selecting former LSU standout Aaron Epps with the No. 6 overall selection Saturday morning.

The versatile Epps does have a shooting touch from the outside, hitting 35 of 103 3-pointers last season. He played in 105 games for the Tigers during his four-year career.

“We weren’t sure if he (Epps) would be available at our spot (No. 6),” interim General Manager Dylan DeBusk said. “He’s going to fit in well with our needs and what we’re doing, and he’ll be able to stretch the court.”

Born in Louisville, Kentucky, Epps was raised in Ball, Louisiana, where he went to Tioga High School, averaging 22.3 points, 11.2 rebounds and 6.7 blocks his senior year.

“It’s a blessing,” Epps said in a conference call Saturday after getting drafted sixth overall by the Suns. “It’s something I’ve worked my whole life for. I appreciate the Northern Arizona Suns for giving me this opportunity.”

The Suns acquired the No. 6 overall pick just 24 hours before the draft, sending Shaquille Harrison and Rahlir Hollis-Jefferson to Memphis on Friday in exchange for the draft pick, and the returning player rights to Shaquille Thomas and Kuran Iverson.

Peters, 23, played for the New Orleans Pelicans at the NBA Summer League in Las Vegas this past offseason. Out of high school, he was considered a five-star recruit, receiving offers from UCLA, Illinois, Rutgers, Xavier and Georgetown before settling on Maryland in 2013.

In the second round, Northern Arizona selected Anthony Mosby at No. 36 out of Alcorn State. The 6-foot-3, 160-pound guard averaged 15.2 points per game in his senior season, starting 62 of 64 games in two years with the club.

The Suns completed the draft with their fourth pick of the day, taking LaQuinton Ross at No. 51.

After the fallout of the Ryan McDonough firing Oct. 8 reached Prescott Valley with the Suns also relieving Louis Lehman of his general manager duties, DeBusk took over basketball operations, but with the assistant general manager tag.

On Saturday, the club announced DeBusk would be the “interim” general manager until further notice.

With Northern Arizona Suns media day scheduled for Monday, an official training camp roster is expected to be released at some point Sunday. Visit dCourier.com for updates.