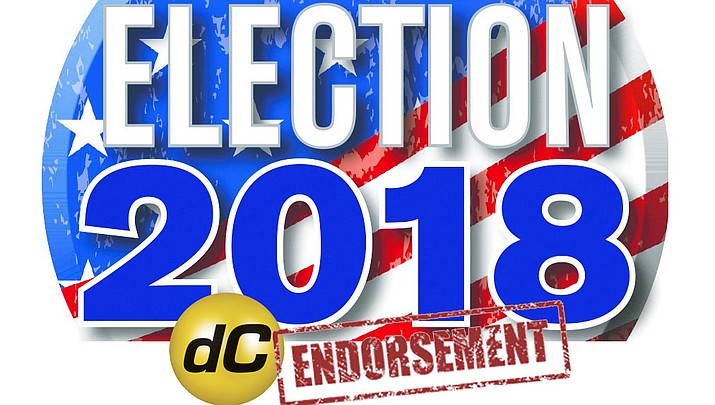 The Daily Courier Editorial Board is making its General Election recommendations, and today we offer our candidate endorsements with picks in partisan races, and our stand on the ballot questions.

Based on background, experience and track record, among other information, The Daily Courier recommendations are as follows:

• Noel Campbell (REP) for one of the two seats in State Representative, District 1

For the ballot measures, The Daily Courier Editorial Board is recommending the following:

• Prop 125 – Pension: A ‘yes’ vote is our pick, to reform the Elected Officials’ Retirement Plan and Corrections Officers Retirement Plan, like has been done with the PSPRS (Public Safety Personnel Retirement System).

• Prop 126 – Taxes: We are urging a ‘no’ vote. This ballot measure woul d prohibit the government from increasing taxes on services in the future; however, “services” is not defined.

• Prop 127 – Energy: The Courier recommends a ‘no’ vote here; while 50 percent energy coming from renewable resources by 2030 sounds good, the measure includes the language, “irrespective of cost to consumers.” That means these changes would happen where infrastructure does not exist, and we would bear the costs – regardless. It also would be a constitutional amendment – pushed by people outside of the state – flying in the face of our values, money, and the ACC.

• Prop 305 – Education: The Editorial Board chooses a ‘no’ vote on this to pull back Senate Bill 1431, which looks to expand the Empowerment Scholarship Accounts program – also known as vouchers. Instead, the state should fix the current school system.

• Prop 306 – Elections: We recommend a ‘yes’ vote, to control unlawful contributions from Clean Elections and provide oversight. This is a step toward pulling back the veil on dark money.

• Humboldt Unified School District bond question, which would raise $15 million for improvements to school safety and security; student transportation; technology improvements; and classroom repairs and renovations, which include roofs, heating, air conditioning and furniture. This deserves a ‘yes’ vote.

Irrespective of these endorsements and recommendations, The Daily Courier Editorial Board urges all registered voters to educate themselves and either return their completed early, mail-in ballot in time or visit one of the voting centers on Tuesday, Nov. 6.

For more information about these races, visit dCourier.com. Additional information on the statewide propositions is in today’s edition of the Courier, on pages 10A-11A. Further voting information is available at www.yavapai.us/electionsvr/2018-elections.