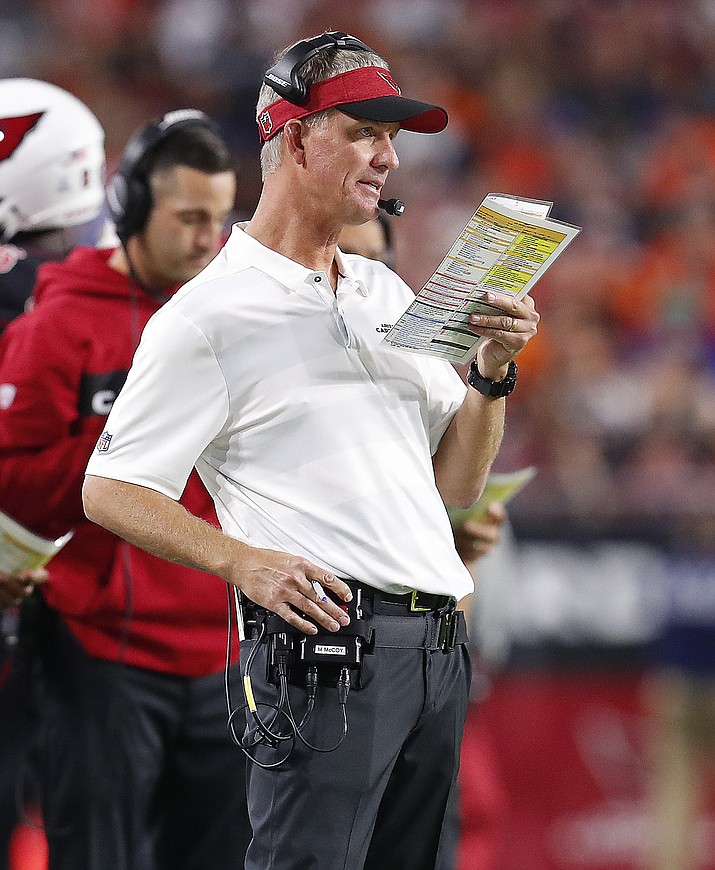 Former Arizona Cardinals offensive coordinator Mike McCoy call a play during the first half of an NFL football game against the Denver Broncos, Thursday, Oct. 18, 2018, in Glendale, Ariz. The Cardinals announced Friday, Oct. 19, 2018, that McCoy has been relieved of his duties and that quarterbacks coach Byron Leftwich will assume his position. (AP Photo/Ralph Freso)

TEMPE — The Arizona Cardinals fired offensive coordinator Mike McCoy a day after the team was blown out at home by the Denver Broncos on national television.

First-year head coach Steve Wilks said Friday that quarterbacks coach Byron Leftwich will take over the job for a club that is 1-6, the worst record in the league.

"Seven weeks into the season, based off where we were from the standpoint of production on the offensive side of the ball, I felt the need to make a change, and that's what I did," Wilks said at a news conference.

McCoy, former head coach of the San Diego Chargers, was fired for the second time in as many seasons. He was let go after 10 games as Broncos coordinator last year.

The Cardinals lost 45-10 on Thursday night, trailing 21-3 after one quarter and 35-3 at the half. Wilks called the effort "embarrassing."

But he said his decision to replace McCoy was not based on that one game alone.

"We weren't productive enough," Wilks said. "Let's just say that, and that may be an understatement."

The Cardinals have lost their first four home games for the first time since 1979, nearly a decade before the franchise moved from St. Louis to the desert.

Arizona entered Thursday night's game ranked last in the NFL in offense and rushing offense and next-to-last in passing offense. The Cardinals have just 10 offensive touchdowns in seven games.

Asked if Leftwich should be considered an "interim" coordinator, Wilks said, "Right now, it's hard to say anybody is going to be permanent."

Leftwich is a holdover from the staff of coach Bruce Arians, who retired after last season and was known for his dynamic offense.

"You definitely want to be able to try to get David Johnson going in the run game as well as the pass game," Wilks said. "With Byron being here before and being part of that and understanding some of the success he's had in the past, hopefully we can tap back into some of the things David was doing in the past."

Leftwich was a coaching intern when Johnson led the league in yards from scrimmage and touchdowns two years ago. He was promoted to quarterbacks coach last year and called plays in the preseason this year.

Wilks has a coaching background entirely on defense. He was defensive coordinator of the Carolina Panthers last year. He entrusted the offense to McCoy, figuring the experience at head coach would help.

But the offense sputtered from the beginning, especially in attempts to get the ground game moving.

The Cardinals switched from Sam Bradford to rookie Josh Rosen at quarterback three games into the season and Rosen had a rough night against Denver, throwing three interceptions — two returned for touchdowns — and fumbling the ball away twice.

Rosen was injured on his final play and was in a walking boot with a sprained toe on his left foot.

"He should be fine and ready to go next week," Wilks said. "We have 10 days and based off what the trainers are saying there shouldn't be any setbacks."

The Cardinals don't play again until Oct. 28, when they host San Francisco.

The 38-year-old Leftwich, a first-round draft pick out of Marshall, played quarterback in the NFL for 10 seasons with four teams — Jacksonville, Atlanta, Tampa Bay and Pittsburgh.

Rosen has been Leftwich's primary project and the two already have a close relationship. Wilks talked about the need to streamline the offense.

"I think what Byron is going to do, from what he and I have talked about, is really trying to figure out what Josh does well," Wilks said. "That's the key thing. When you have a young quarterback, we want to make sure that we're putting him in a position to where he can go out there and not have to think so much. Those are the things that we've talked about."

Wilks said Rosen is very intelligent, that's not the problem.

"I think it's clarity," Wilks said. "That's what we need, and we didn't have that. We've got to have clarity in exactly what we're doing in certain situations."

McCoy, who has worked in the NFL since 2000, was a highly successful offensive coordinator in a first stint with Denver, leading to him being hired as head coach by the Chargers in 2013. He was fired after four seasons with the Chargers.