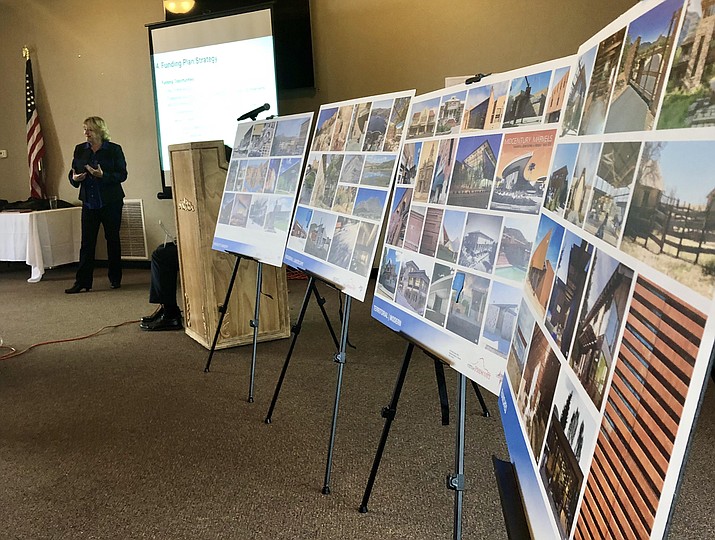 Prescott Airport Director Robin Sobotta presents information about the future of the Prescott Airport during a Tuesday, Oct. 16, open-house presentation on the design of the new airport terminal. Design consultants displayed dozens of photos of airport terminals around the country, as well as iconic Prescott buildings and landscapes. (Cindy Barks/Courier)

When the preliminary design for a new airport terminal is complete late this year, it likely will include elements of iconic Prescott architecture.

During a Tuesday, Oct. 16, open-house presentation by consultant architects, members of the audience offered thumbs-up and thumbs-down reactions to dozens of ideas for the look of the airport terminal that is currently under design.

Among the big thumbs-downs was the architectural model of Prescott’s 1960s-era City Hall. The buildings around the courthouse plaza, on the other hand, received a thumbs-up.

Councilman Steve Sischka pointed out that Prescott has many different looks – from the Victorian style of Mount Vernon, to the craftsman bungalows in the area near the Lincoln Elementary School on Park Avenue.

“What really is Prescott?” Sischka asked. “When you think about Prescott, it’s really the downtown area that everybody loves. For me, it’s got to be Territorial.”

Architect Sandra Kukla, executive vice president of DWL Architects and Planners, Inc., explained that the 30-percent schematic design for the new building is underway, and is expected to be done by December.

With that schematic design will come the basic appearance of the exterior, as well as layout for parking, and the interior strategy.

The next phase, involving 60-percent design, will fill in the details on the building system routing and coordination. That phase is expected be complete by February, Kukla said.

The 100-percent construction design, which will detail the final specifications and the building finishes, is slated to occur from March through May.

Costs could also go up to accommodate the growing use of the airport. Depending on whether the city opts to include road and parking improvements, the estimated cost could go from the $6-million/$7 million range to the $7-million-to-$8 million range, Airport Director Robin Sobotta said.

Decisions on whether to do “just enough” or whether to position the airport well into the future would have to be made in the coming months, she said.

The city plans to break ground on the new terminal by the fourth quarter of 2019.